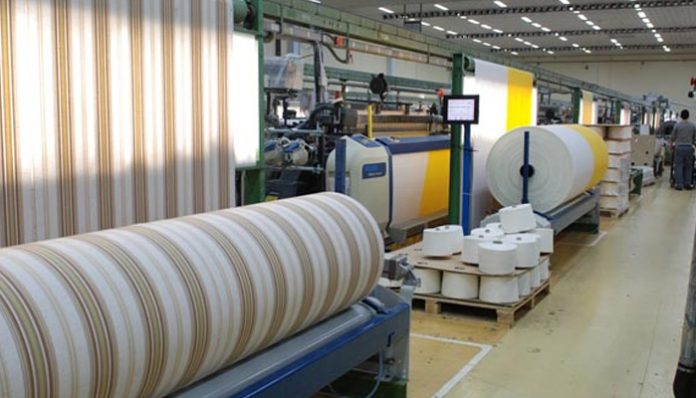 KARACHI: (DNA) –  Textile exports clocked in at $1.204 billion for May, up 28.4 percent year-on-year and 4.8 percent month-on-month, official data showed on Wednesday.Pakistan Bureau of Statistics (PBS) data showed that textile exports amounted to $938 million in May last year and $1.148 billion in April.Analysts attributed a nominal sequential surge in exports to the part release of exporters’ stuck refunds. The last government disbursed refunds worth Rs31.5 billion in the last week of May.

Muffasar Malik, president of Karachi Chamber of Commerce and Industry (KCCI) said exports had sharply descended to several destinations around the world in the past because of rising cost of doing business. “It must be kept in mind that rising dollar would lead to costlier imports and the exporters will also bear the brunt due to rise in cost of imported raw materials,” Malik said. “Any further devaluation would increase their cost and make Pakistani exporters less competitive, plunging the economy into further deep crisis.”

Rupee lost around 14 percent since December last year as the government let the rupee depreciate against the US dollar.

The Federation of Pakistan Chambers of Commerce and Industry (FPCCI) said textile sector’s share in the country’s total exports remained stagnant at 60 percent for long.

“The area of concern is that Pakistan’s competitors have set targets for textile exports, while Pakistan remains far behind them,” FPCCI said in a report. “Pakistan’s total exports declined to $20 billion from $25 billion.”

An exporter said the country is only getting spillover orders and that too would stop coming once the competitors increase their capacity. “The government should come with a concrete and sustainable policy to facilitate exporters,” the exporter added.

Oil and machinery continued to be the big-ticket import items during the July-May period. Oil imports surged 30.4 percent to $12.928 billion. Machinery imports, however, marginally fell 2.2 percent to $10.632 billion. Imports of agriculture products and other chemicals amounted to $8.137 billion, up 17.5 percent. Food imports inched up 1.1 percent to $5.715 billion. Metal group’s import surged 22.1 percent to $4.917 billion. Transport group’s imports stood at $3.821 billion, up 27.9 percent, while textile imports amounted $3.291 billion, depicting an increase of 6.4 percent in the July-May period.