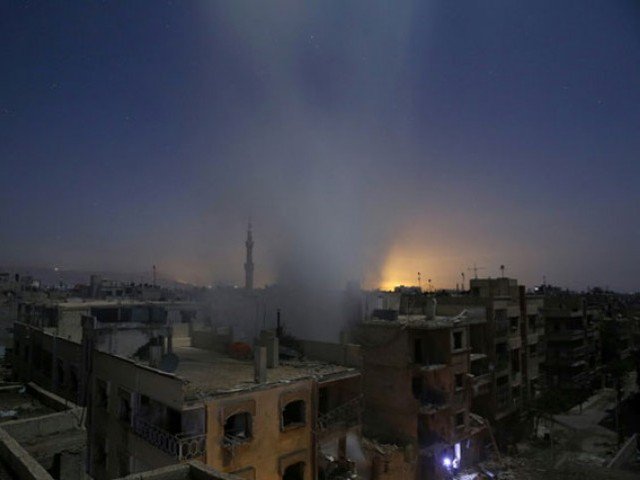 DAMASCUS, APR 14 (DNA) – : Syrian state media slammed Western strikes on Saturday as illegal and “doomed to fail,” after the US, France, and Britain launched a joint operation against the Damascus government. “The aggression is a flagrant violation of international law, a breach of the international community’s will, and it is doomed to fail,”.

Huge blasts were reported around Damascus early on Saturday, moments after the US, France, and Britain announced they were striking Syria’s chemical weapons capabilities.

several consecutive blasts were heard at 4:00 am local time, followed by the sound of airplanes overhead. Smoke could be seen emerging from the northern and eastern edges of the capital.

reported that the joint operation was targeting military installations around Damascus and near the central city of Homs.

give a toll for Damascus or mention any combatant casualties.
Several missiles hit a research centre in Barzeh, north of Damascus, “destroying a building that included scientific labs and a training centre,”.

State media published images of a cloud of reddish smoke hanging over the capital and said that air defences were activated to block the attack.

But it said skies were clear over Aleppo in the north, Hasakeh in the northeast, and Latakia and Tartus along the western coast, where key Syrian and Russian military installations are located.

Iran warned of “regional consequences” on Saturday following a wave of punitive strikes in Syria by the United States, Britain and France.

“The United States and its allies have no proof and, without even waiting for the Organisation for the Prohibition of Chemical Weapons to take a position, have carried out this military attack,” said the foreign ministry in a statement.

They “are responsible for the regional consequences of this adventurist action,” it added.

Tehran officials have said Western powers are using last week’s alleged chemical attack on a rebel-held stronghold as an excuse to undermine the Syrian government’s recent successes on the battlefield.

Seven Iranians were killed in an air strike on a Syrian military base on Monday, which Iran said was carried out by Israel.

The joint operation came one week after a suspected chemical attack on an opposition-controlled town outside Damascus left more than 40 people dead.