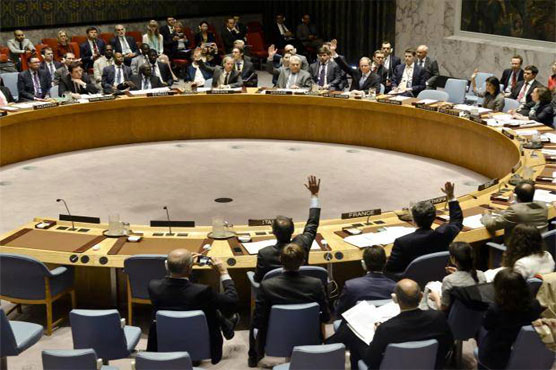 UNITED NATIONS, APR 10 (DNA) – The UN Security Council could vote as early as Tuesday on rival US and Russian proposals to investigate chemical weapons attacks in Syria, setting up a clash that could trigger vetoes of both measures, diplomats said. The United States put forward a draft resolution Monday following alleged toxic gas use in the rebel-held town of Douma that killed at least 40 people and prompted President Donald Trump to indicate that a decision could be taken soon on US military action.

US Ambassador Nikki Haley told a closed-door Security Council meeting that the United States wanted a vote on the measure, even though Russia said it contained “some unacceptable elements.”

Russia put forward its own proposal in January that has been rejected by Western powers who say it would give the Syrian government an upper hand over investigations on its territory.

“The United States is pushing for a vote tomorrow,” said a Security Council diplomat. “The US position was that they were negotiating in good faith, but the world is watching for the council to act.”

There was no formal request for a vote, however, by early evening on Monday.

The US push for a new inquiry came amid heightened tensions over possible US military action in Syria, with Trump saying “major decisions” would be taken within 48 hours.

“From what we hear now, I am afraid they are looking for a military option, which is very, very dangerous,” Russia s UN Ambassador Vassily Nebenzia told reporters following an emergency council meeting.

Trump — who last year launched a missile strike on a Syrian air base after sarin was used in the town of Khan Sheikhun — warned after the latest accusations that there would be a “big price to pay.”

Rescuers and medics in Douma say more than 40 people died after a “poisonous chlorine gas attack” late Saturday in the last rebel-held pocket of Eastern Ghouta.

At the council meeting, Nebenzia warned that a US military strike against Syria could have “grave repercussions” and stressed that the use of chlorine or sarin had not been confirmed in the attack.

Haley urged the council to take action, but warned that the United States was ready to respond, with or without the United Nations.

“We have reached the moment when the world must see justice done,” Haley said.

“History will record this as the moment when the Security Council either discharged its duty or demonstrated its utter and complete failure to protect the people of Syria,” she added.

“Either way, the United States will respond.”

The Russian envoy said Moscow had told the United States that it would not allow its forces on the ground in Syria to be put at risk.

“Armed force under mendacious pretext against Syria, where, at the request of the legitimate government of a country, Russian troops have been deployed, could lead to grave repercussions,” Nebenzia said.

Moscow and Damascus have fiercely denied that chemical weapons were used in Syria.

A draft resolution requires nine votes to be adopted and no vetoes from the five permanent members – Britain, China, France, Russia and the United States.

Russia has used its veto power 11 times at the council to block action targeting its Syrian ally.

“The US resolution is pretty obviously a bait for the Russians, who will have no choice but to veto it,” said Richard Gowan, a UN expert from the European Council on Foreign Relations.

“That will give the US and possibly France an excuse for military action,” said Gowan.

“All sides know what is going on, and the Russians have actually been predicting US military action over Ghouta for some time. We just have to hope that Moscow will not overreact when the strikes come.”

Russia killed off a previous UN-led probe in November by vetoing the renewal of its mandate.

The United States is proposing to establish the new panel for one year to work with the Organisation for the Prohibition of Chemical Weapons to identify perpetrators of chemical attacks.