ISLAMABAD, DEC 12 (DNA) – Mr. Jean-Bernard Sempastous the President of France-Pakistan Friendship Group of the National Assembly of the French Republic and Senator Pascal Allizard have acknowledged Pakistan’s sacrifices in the fight against terrorism. They also vowed to maintain regular contacts with their Pakistani counterparts. The French parliamentarians are also keeping a close eye on the progress of China, Pakistan Economic Corridor (CPEC) and will submit a report to French Senate after conclusion of their Pakistan visit.

Both these French parliamentarians expressed these views while talking to a select group of journalists at the residence of French ambassador. Other members of the delegation were also present on the occasion. 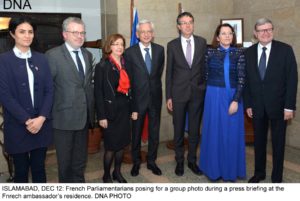 Senator Allizard who is responsible for CPEC, vice president of the Committee on Foreign Affairs, defense and armed forces said, they have already visited China and met with Chinese officials where they were briefed about One Belt One Road Project.

He said Pakistan is playing very important role in One Belt and One Road initiative and one of the reasons that they were here in Pakistan was to discuss various aspects this project with the Pakistani officials.

Pakistan he said would of course benefit from the CPEC especially in the field of economy and huge infrastructural development including port of Gwadar besides significant development of the education sector.

To a question about the significance of OBOR Senator Pascal said France is interested in this project because of various reasons. Ostensibly this project has huge geo- strategic importance. France has very close ties with China. Then you may know former French president Charlas de Gaulle was the first head of the state to recognize China.

France has not yet singed any of the OBOR projects however the French President Emmanuel Macron shall be visiting China in January 2018 and during his visit further discussion would take place on this subject, he added.

This project has multiple aspects and one of the purposes of our visit to this region is to study all aspects of this project and compile our recommendations that we will present before the Parliament, he added.

Senator Pascal further said we are also interested in knowing the stage of progress of this project. In Europe there are some anti-OBOR voices also therefore our endeavor is to weight this project from all aspects.

“Though, the main purpose of our visit is not to discuss CPEC only but various aspects of bilateral relationship, but the Pakistani side asked us to play role in CPEC, however we told our Pakistani interlocutors that we can only respond to this invitation after discussion at home”.

The MPs said it is up to the French parliament to decide whether to join OBOR or otherwise. Our task is to furnish a report by assessing and studying the project from all angles.

On Bilateral relations the French MPs said relations between two countries are very cordial and efforts from both sides are being made to further strengthen and diversify these relations. “Recently we received Pakistani girl students studying in Paris, at the Senate and two weeks ago there was also a cultural conference in Lahore”.

The MPs said there is still scope for medium and small size enterprises in Pakistan from Europe in fields like water, energy etc and France in these fields has a lot of expertise.

To a question about Nuclear Suppliers Group (NSG), the French MPs said nothing related to this subject came under discussion with the Pakistani officials, though they discussed a host of other issues related to security.=DNA