ISLAMABAD, NOV 23 (DNA) – Embassy of Uzbekistan in collaboration with Iqra University hosted a grand fashion show in order to show case various traditional Uzbek costumes. The show, which was largely attended by members of civil society, media and diplomatic corps, provided the guests with an opportunity of getting them acquainted with the marvelous Uzbek costumes. Ambassador of Uzbekistan Furqat Sidqov in his brief remarks termed the event historic and landmark as it was happening for the first time that Uzbek costumes were exhibited in front of a large number of people.

The Uzbek ambassador further said relations with Pakistan are deep-rooted and growing with the each passing day. He especially mentioned recent high level visits that took place between the two countries with a view to further strengthening bilateral relations. 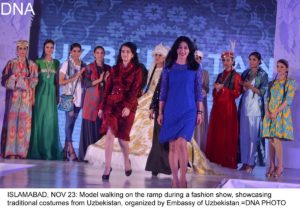 Ambassador Furqat said he and his team shall continue to making such efforts even in the coming days. He thanked all those who had contributed to make the even a complete success.

Uzbek clothes represent the rich cultural heritage of the people of Uzbekistan. Though it is uncommon to meet people in urban areas garbed in traditional Uzbek clothing nowadays, they can still be seen at national festivities and holidays as well as in rural parts of the country.

Uzbek national dress is often made from the exquisite Atlas or Adras fabric. It is evocative of the beauty of Uzbekistan, drawing inspiration from fruits, trees and buildings in its patterns.=DNA