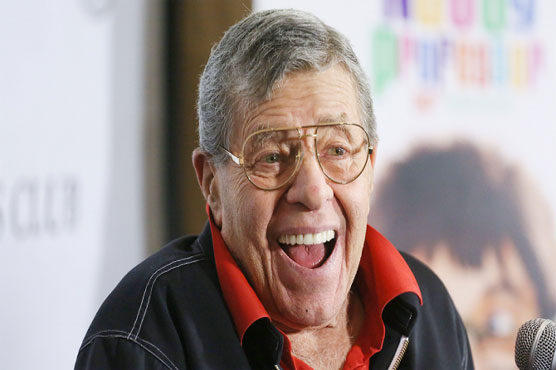 WASHINGTON, AUG 21 (DNA) – Veteran Hollywood comedian Jerry Lewis, who died Sunday aged 91, perfected a goofy brand of slapstick that endeared him to millions over the course of a career spanning six decades. One of the most popular American entertainers of the 1950s and  60s, Lewis made his name as the clown behind such quirky comedies as “The Nutty Professor” but also won acclaim as a writer, actor and philanthropist. The comedy legend, who at the peak of his popularity was among the world s biggest movie draws, died at his home in Las Vegas early Sunday morning.

“I can sadly confirm that today the world lost one of the most significant human beings,” said his publicist Nancy Kane. “Jerry died peacefully at home of natural causes surrounded by family and friends.”

Fans were leaving flowers at the comedian s two stars on the Hollywood Walk of Fame. Hollywood s iconic TCL Chinese Theater was to dim its lights Sunday evening in honor of Lewis, who in 2014 sank his hands and feet into the cement squares in the theater s forecourt.

Honored with accolades at home and abroad, including a Nobel Peace Prize nomination and France s Legion of Honor, Lewis became known as much for his tireless efforts to promote awareness of Muscular Dystrophy as for his wacky comedy.

Over the course of 45 years, he raised some 2.45 billion dollars for combatting the disease with an annual television event.

Born Joseph Levitch in Newark, New Jersey to two New York City entertainers, Lewis first took center stage at the tender age of five, when he performed “Brother, Can You Spare a Dime?” He began playing at resorts outside New York City that catered to Jewish patrons, known by touring entertainers as the Borscht Circuit.

By age 15, he had assembled his own routine of lipsynching and made the rounds of New York talent agents, though to little avail.

At the age of 20, however, everything changed as Lewis embarked on arguably one of the most successful entertainment partnerships of all time with smooth crooner Dean Martin.

The two fed off each other in now-classic comedy gags, including pratfalls, slapstick and lots of seltzer water, signing a long-term contract with Paramount Pictures.

“That fool was no dummy,” tweeted the comic star Jim Carrey, who cited Lewis as an inspiration. “Jerry Lewis was an undeniable genius an unfathomable blessing, comedy s absolute! I am because he was!”