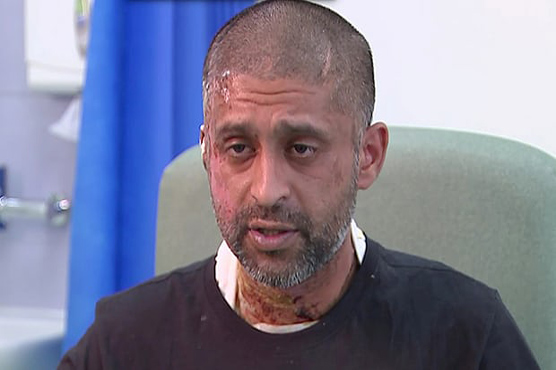 LONDON, AUG 19 (DNA) – “I can’t be around anybody, I’m embarrassed to even talk to people,” says Jameel Mukhtar. “I don’t go outside anymore, I can’t even look at myself in the mirror.” It is almost two months since he was doused with acid through a car window as he waited at traffic lights with his cousin, Resham Khan, after celebrating her 21st birthday. Muktar remembers the liquid feeling cold, and then starting to burn, melting through his skin, clothes and shoes. Unable to see, he crashed the car and dragged Khan out of the passenger seat, stripping off her burning clothes and banging on the doors of nearby homes for water to wash off the burning liquid.

By the time they reached hospital, both victims had suffered what police called “life-changing injuries.”

Mukhtar was put in an induced coma for emergency treatment, waking to find himself deaf in one ear, with damage to his right eye and suffering extensive burns to his upper body, arms, legs, back, neck and face.

He said he remains in “continuous pain” from burns and skin grafts, as the ordeal takes its toll on his mental and physical health. “I can’t walk, I can’t eat, I can’t sleep, I can’t even go to the toilet – I can’t do anything for myself,” Mukhtar told.

“I’m in an area where I don’t know anybody, I’ve got no help, no nothing, I daren’t go outside because everybody is looking at me…I’m ruined for life.” The 37-year-old is living alone in a bedsit and says he is struggling to manage his recovery, with no family living nearby to help.

He is hoping to use funds donated by members of the public to cover his rent and rehabilitation while remaining unable to work.

A GoFundMe account set up in Mukhtar’s name has so far reached almost £19,000, while donations to a separate page for Khan is nearing £60,000 – including £5,000 from JK Rowling. Mukhtar claims he and his cousin agreed to pool the funds and split them in half in the aftermath of the attack but Khan has now decided to stick to their separate accounts.

However, she has denied that they ever planned to share the money equally.

Khan has announced the start of a campaign to combat increasing acid attacks in the UK, including a petition signed by more than 520,000 people, and has been blogging about her recovery. The 21-year-old suffered burns requiring skin grafts and leaving scarring on her legs, arms and face but hopes to return to Manchester Metropolitan University, where she is studying business management.