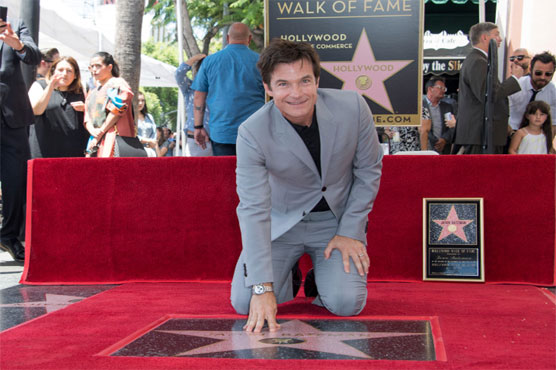 LOS ANGELES, JUL 27 (DNA) – Emmy-nominated actor Jason Bateman was honored with a star on the Hollywood Walk of Fame on Wednesday, 30 years after breaking into the movies in “Teen Wolf Too.””Friends” star Jennifer Aniston, who appeared in five films with Bateman, and Will Arnett, his cast mate on television s “Arrested Development,” gave speeches paying tribute to his staying power.  “I just simply feel very, very grateful and fortunate to have had a chance to hold my job in a business that s not known for its longevity,” said the 48-year-old actor.

He added that he felt lucky “being able to work with enough good people to not only learn an enormous amount, but to find in them some friends that have changed the way I see the world.”

Bateman received Emmy nominations for his portrayal of Michael Bluth in “Arrested Development” in 2005, when it aired on Fox, and 2013, when it was streamed on Netflix.

The actor can currently be seen in Netflix s “Ozark” as a financial planner who relocates from Chicago to a summer resort community in the Missouri Ozarks and has to pay off a Mexican drug lord.

The father-of-two made his television debut at the age of 12 with a recurring role on the NBC period family drama “Little House on the Prairie.”

He appeared in the NBC comedies “Silver Spoons” and “It s Your Move” in the early to mid-1980s before transforming into a teen idol through his role on another of the network s sit-coms, “The Hogan Family.”

They also appeared together in “The Break-Up” (2006) and, ten years later, “Office Christmas Party.”

“Having longevity in this business is not easy, especially starting out as a child actor,” said Aniston, 48, who brought out pictures of Bateman as a young star.

“Usually that s a story that doesn t always end well. When I actually met Jason it was kind of looking like it could go either way.”

But Aniston went on to describe him as a “fantastic partner in crime,” “the most generous straight man” and a “dear friend.”

“He is the loveliest man to be around. He always gives you deep connection, full attention, authenticity and some of the deepest belly laughs I can remember,” she said.=DNA