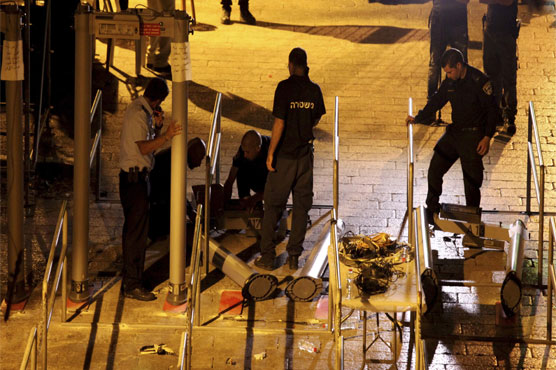 JERUSALEM, JUL 26 (DNA) – Israel removed metal detectors from a highly sensitive Jerusalem holy site after their installation triggered deadly violence, but Muslim worshippers kept up a boycott, suspicious over what would come next. Palestinian president Mahmud Abbas said he would maintain a freeze on coordination with Israel despite the climbdown. Israel’s decision on Tuesday came in the face of intense international diplomacy seeking to prevent the dispute over the Haram al-Sharif mosque compound, known to Jews as the Temple Mount, from sparking wider Palestinian unrest.

The government said it would introduce more discreet measures to secure the compound housing the revered Al-Aqsa mosque and Dome of the Rock.

It installed the detectors at entrances to the site following a July 14 deadly attack nearby that killed two Israeli policemen.

But Palestinians, who saw the new security measures as an Israeli attempt to assert further control over the site, continued their boycott.

Several hundred Muslim worshippers prayed in the surrounding streets Tuesday despite the summer heat, as they have done since the crisis began.

“What we want and what we demand is for everything to return how it was before July 14,” said Mohammed Hijazi, who came from Acre in northern Israel to join the protests.

“When that happens we are ready to return to enter the Al-Aqsa mosque to pray to God Almighty.”

The compound is the third-holiest site in Islam and the most sacred in Judaism.

The White House Tuesday welcomed the security cabinet’s decision, saying the “the United States applauds the efforts of Israel to maintain security while reducing tensions in the region”.

Israel will replace them with “a security inspection based on advanced technologies and other means,” Prime Minister Benjamin Netanyahu’s office said.

Further details were not immediately available.

The Waqf, the Islamic endowments organisation which administers the compound, said there should be “no entry” until it had assessed the site and security measures had returned to their status prior to July 14.

Abbas, who last week froze contacts with Israel including security coordination, said Tuesday that would continue “unless all measures go back to what they were before July 14”.