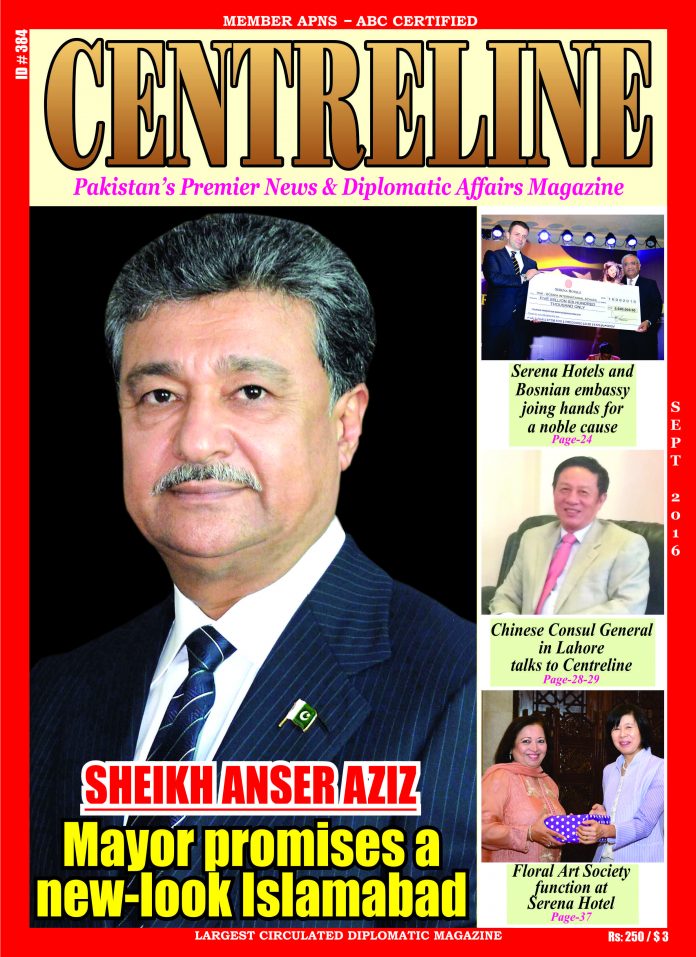 Sheikh Anser Aziz, the first elected Mayor of Islamabad gave a detailed interview to Centrelineand Diplomatic News Agency (DNA), the first to any publication or news agency after being elected to the office of the Mayor of the Metropolitan Corporation Islamabad (MCI). Sheikh Anser Aziz touched upon various issues confronting the federal capital. Besides, he also unfurled his plas to make the city even better. Here are excerpts from his interview.

Islamabad is undoubtedly one of the most beautiful cities of Pakistan but there is a lot more to be done to bring it at par with the developed and beautiful capitals of the world. The Prime Minister of Pakistan, Mian Muhammad Nawaz Sharif has given out his vision to modernize Islamabad and let me assure you that we are in fact following this very vision as our guiding principle for our plans and actions. Let me also assure the residents of Islamabad that no stone shall be left unturned in making this city a must-visit place. As regards your question about some immediate measures, you may know that the IJP Road was in a shambles for a long time and there was a long standing demand of the residents for its repair. Soon after taking over we have immediately approved the repair work of this very important road that links Islamabad to Rawalpindi and to the Motorway also.

Transfer of directorates to Metropolitan

As many as 23 departments previously run by the Capital Development Authority (CDA) have been handed over to Metropolitan Corporation Islamabad fully while 22 directorates have been partially transferred to us.  The employees shall eventually be transferred to us, though a case for transfer of employees is pending adjudication at the Islamabad High Court. The reason for the reluctance of the employees to join us is probably they are fully conscious of the fact that they will now have to actually work here to justify their employment!  Nonetheless, we will wait for the court decision. We have streamlined the processes of internal administrative working of IMC which will ensure that each and every employee attends his office regularly and devotes the required time to the demands of his job. We have in place proper systems that will keep a check on the employees and prevent them from hoodwinking the management and the systems.

There were some departments that the CDA wanted to retain including F 9 Park, Lake View Park, Zoo and Building Control Authority. The prime minister has intervened in the matter and has ordered that these departments must come under the control of the IMC. As regards the building control specifically, the prime minister, has overruled CDA’s reservations, and ordered to establish an authority within IMC that would monitor building related matters.

There are some water problems and we are fully aware of these problems. We have both long term and short term programmes in this regard. On longer term basis, we have plan to fetch water from Ghazi Barotha canal. Sindh initially had some reservations but when I took up this matter with the prime minister he assured to address this issue. As you know after 18th amendment provinces consent is necessary for such projects. This project now is expected to be spurred as Sindh has given its approval. Let me tell you that if this project is completed the drinking water related issues of residents of both Islamabad and Rawalpindi shall be solved for at least the next 40 to 50 years.

As per our short term plans, we are reactivating the tube wells besides improving the management of these plants. Funds are also being provided where necessary in order to immediately address water-related problems.

A New-look to Diplomatic Enclave

Cleanliness of the diplomatic enclave is of course my priority as most of the foreign missions are located in this area. For the moment no proper maintenance of this area is undertaken owing to which unchecked wild growth has badly spoiled the beauty of the enclave. My first priority is to carry out an immediate operation in this regard and you also will see a marked improvement of the enclave particularly in terms of road infrastructure and building of footpaths.

Similarly, we have plans to further improve the trekking areas as a number of trekkers is increasing day by day. The Environment Protection Agency has raised some issues however I am sure we will be able to resolve these amicably. As regards the chair lift project in Margalla Hills, it is our strong desire to start this project sooner rather than later because this will surely generate massive tourist activity besides it will generate revenue also. There is also possibility of a establishing a food street in F 9 Park provided there is no legal hitch.

To improve the environment of the capital we have plans to plant more and more trees. Towards this end, we have also planned a public awareness drive which will encourage more residents to plant trees.

Parking spaces around commercial areas no doubt is now a major issue in Islamabad. Most of the parking lots are illegally occupied by people owing to which genuine residents or shoppers do not find a parking space. I have instructed that a detailed survey of all areas should be undertaken and we should come up with workable plans to address the issue. It is indeed a pity that people who buy or rent a single room office establish a car showroom that occupies the entire surrounding areas and the parking lots for the business.  This practice has gone unchecked in the past, certainly with the connivance of the concerned staff.

We intend to hold joint meetings with all such people and will apprise them that they have illegally occupied the area and will even give them some notice period to stop the practice.  Eventually in case of non-cooperation we will be constrained to initiate a legal action against them. We are also considering allocating some space to these showrooms outside Islamabad so that they all relocate to these areas. We hope that you will soon see a significant improvement in this regard.

We will also make sure that all plazas and shopping malls have their own parking areas. Legally these shopping malls are bound to build parking areas also but generally they do not follow the legal procedures. Henceforth we will ensure that such violators are dealt severely.

With regards to development of Sector G 14, you would know that this comes under the purview of the Pakistan Housing Foundation. Nevertheless this is indeed a genuine problem of all those who were allotted plots in this sector many years back and it merits our immediate attention. As you mentioned, some of the original allottees have unfortunately passed away. We will put in sincere efforts with the Housing Foundation authorities and convince them to expedite work on this project to enable the allottees to build their houses.

Convening of International Mayors’ Conference is indeed on our agenda list but we want to gain some time to enable us to showcase something special here which will be worthwhile to show to the foreign delegates. Hopefully by the end of this year, we shall be able to hold this conference. With Beijing and Ankara we already have sister-city arrangement. Regarding the twin city project, we already have some arrangements with some cities however there are possibilities of having similar arrangements with more cities. I was in China a couple of weeks ago and there too I discussed this possibility with the Chinese authorities. Likewise, we would like to have the twin-city arrangement with various European countries also. We also have a plan to allocate some area in F 9 Park for those countries with whom we plan to have sister-city arrangement so that they could build a monument there.

The key to success of all projects that we launch is proper funding. We are already in touch with the government for allocation of a sizeable grant and I am confident we will get this amount in the coming days. For the moment we are running our day to day affairs by borrowing money from CDA but once we get our own fund allocation we will then return this loan to CDA. We have 50 union councils and I think we need about a  billion rupees for each union council. We have requested the government to release these funds as soon as possible so that development projects could be executed.

For promotion of sports activities we have devised comprehensive plans. Our first and foremost priority is to ensure proper upkeep of the existing play grounds. Every sector has a play ground however they are in extremely bad shape. We have plan to lay another Astroturf in Islamabad in order to promote the national game.

Similarly, a big cricket stadium is also on cards for which the prime minister has already given the approval. The proposed stadium shall be constructed at Shakarparian near the parade ground. For future, we plan to depute at least two guards at each sports ground plus some other auxiliary staff so that proper maintenance of the sports ground is ensured.

The prime minster has recently formed a committee for the regulation of health sector of which I am also a member.  This committee shall be responsible for monitoring the  health institutions of the Capital. The purpose of this authority is also to bring all the health institutions under one umbrella. Once the authority starts its formal functioning, health related facilities will improve to a great extent. There is a plan to build four new hospitals in the areas of Tarnol, Bara Kahu and Tarlai. Presently, people from these areas visit PIMS or Polyclinic, that not only takes a lot of their time but it has placed  considerable burden on the existing health facilities.  After the establishment of the four news hospitals, burden on PIMS and Polyclinic Hospital shall be considerably reduced.

Establishment of a Helpline

To address people’s problems on priority basis, we have set up a 24/7 Helpline which is available to the residents of Islamabad. We will make sure that all complaints are registered and addressed promptly. The deadlines are to be given to the concerned staff for the rectification of the fault and how to deal with employees who fail to comply with the deadlines etc.? I am confident after the introduction of this helpline service, the complaints of the residents shall be addressed efficiently.