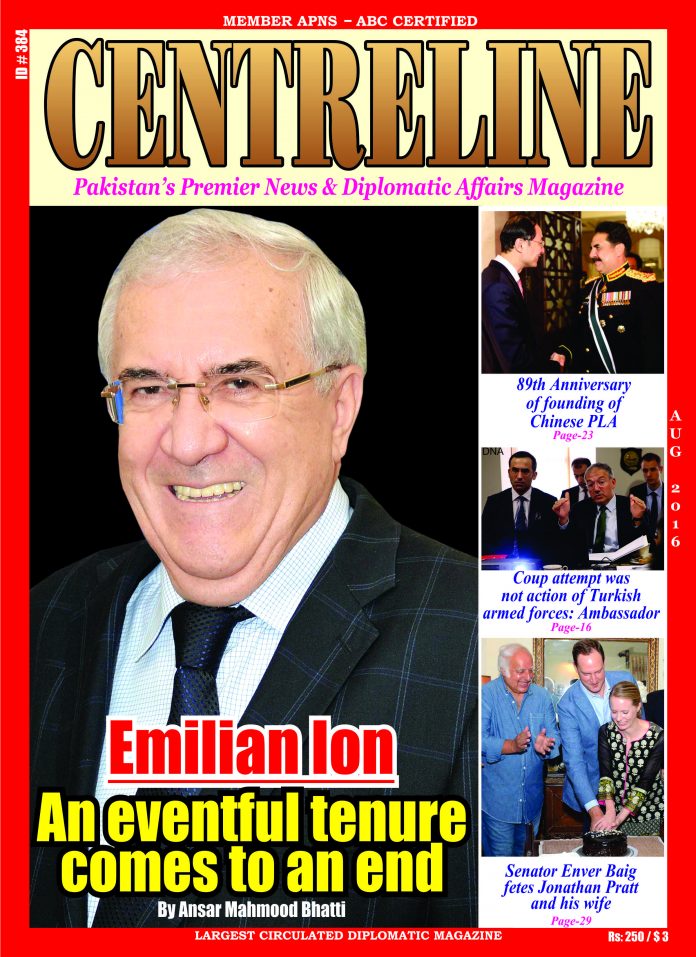 Ambassador of Romania Emilian ION who is also the acting Dean of Diplomatic Corps these days gave an exclusive interview to Centreline and DNA on completion of his tenure in Pakistan. Ambassador Emilian is leaving Pakistan on August 17, 2016 after completing a seven and half years tenure. Here are excerpts from is interview.

Now when you are about to end your tenure in Pakistan, how would you sum up your seven and half years stay in Pakistan?

Pakistan is a wonderful country and people here are very caring and hospitable. Pakistan is so rich in natural as well other resources, therefore, you do not need to go to any country for help. As I always said that I am confident if these resources are exploited and utilized judiciously, Pakistan’s economy would surely see tremendous improvement.

Bilateral relations between Romania and Pakistan are from cordial to excellent. Some high level visits on both sides have in fact given impetus to these relations. About 50 years ago, Romania and Pakistan officially established diplomatic relations at the Embassy level. It was the start of a partnership which has over time proven that geographical distance and geopolitical differences could not affect what today is a traditional and friendly relationship between the two countries.

I would like to point out a few historical facts which underline the evolution of the bilateral ties. In the 70’s and 80’s, Pakistan imported Romanian know-how and technology. It is worth mentioning the contribution of Romanian engineers and specialists to the building of the National Oil Refinery in Karachi, and also to be an important part of the Pakistani cement industry with the help with Romanian technology (Cement Plants in Kohat, Lasbella, as well as the Saadi – I, Saadi – II and Pakland projects).

As an important member state of EU, Romania wholeheartedly supported Pakistan’s bid for GSP plus. We assure Pakistan that we would continue extending similar support to Islamabad in the coming days.

We also support all efforts that are being made for the regional peace because it is the sin qua non for enhanced trade and economic activity. With regards to India, we would wish that both countries settle their issues amicably.

Please give a brief acccount of your efforts for the promotion of bilateral relaions between the two countreis?

As Ambassador of Romania, I used all my skills and expertise to promote the bilateral relations in all fields, with a particular emphasis on economic and cultural ties. In this regard, I can mention some significant achievements during the last few years toward Pakistan – Romania relations. The completion of the bilateral legal framework, through the signing of inter-governmental Agreements on Economic Cooperation (September 2011) and Defence Cooperation (February 2013).  The launch in February 2011, with the assistance of a group of young businessmen from Karachi of the Pakistan – Romania Business Council (PRBC), an independent company which has been created in compliance with the Pakistani laws, to act as a bridge between the business communities of the two countries.

I take this opportunity to congratulate PRBC for proving to be a very active platform by organizing in the first three years of its inception, visits of two Economic Delegations to Romania, and also for opening a sister company in Bucharest. Punjab Romania Business Forum in Lahore is also on the anvil.

The reopening in 2013 of the Honorary Consulates of Romania in Karachi and Lahore, as well as the opening of two new Honorary Consulates in Faisalabad (also in 2013, being the first of its kind in this important textile centers of Pakistan) and Peshawar (in the summer of 2014). It is also my wish to open a consultae in Quetta also. I am already in touch with the concerned quarters and hopefully I will share some good news in this regard.

Culture has been promoted through various means especially music – Sufi Qawwali Groups have performed at a number of events organized by our Embassy, as well as by the Embassy of Pakistan in Romania. It is worth mentioning that there is an ongoing cooperation in the field of education, currently 14 Romanian teachers are teaching mathematics in Abdus Salam School of Mathematics in Lahore.

As you know, a cultural team was here in Pakistan. This music group comprised three musicians including my granddaughter Cristiana Ioana Ion. She was also part of the group and took part in many functions held under the auspices of the Romanian embassy. I think this was a great moment in terms of cultural relations between the two countries and I do hope such cultural contacts would further grow in the coming days.

How would you describe the educational links between Romania and Pakistan?

Cooperation in education sector has evinced good interest which is contributing to by some Romanian and Pakistani universities. The Rector of COMSATS Institute of Information and Technology has recently visited Romania, and over 200 Pakistani students are currently studying in Romania.

An important role in promoting cultural ties is performed by the Pakistan Romania Friendship Association (PRFA), whose activities I have managed to revive. Through social and cultural activities, PRFA was and will continue to be a good platform to bring Romania and Pakistan closer and spearhead cultural activities in the future.

A separate point that shows the importance the two countries attach to the cultural cooperation is the Monument dedicated to the National Poets of Pakistan, Allama Iqbal, and of Romania, Mihai Eminescu, which was constructed in 2004 in Islamabad, near the Kulsoom International Hospital.

Political and economic cooperation between the two countries have increased manifold. Can you share some salient features of this cooperation?

Pakistan is a very important partner in the region for Romania, the 7th largest member of the European Union. I am very confident that the next round of political consultations at high level between our Ministries of Foreign Affairs will assess the evolution and generate a road map, with concrete actions, to consolidate and promote further bilateral relations between our countries in the political, economic, cultural and other fields of common interest.

In my opinion, the current volume of trade does not reflect the real economic potential of our countries and both Embassies in Islamabad and Bucharest have to do much more in this regard. Besides, as you may know in recent days various business delegations visited Romania including the Sahiwal, Lahore and Chakwal Chambers of Commerce & Industry who went there and explored ways for mutual cooperation. I sincerely believe by enhancing people to people contact, we can surely improve bilateral relations in all fields. Romania is not very far off from Pakistan, therefore, we should make maximum use of this plus point.