French President Francois Hollande has called for “much more” to be done to maintain the rail network, in a Bastille Day interview two days after a major train accident near Paris. He told French TV more effort must go into conventional lines, with the priority on the regional network. Friday’s train crash at Bretigny-sur-Orge south of Paris left six people dead and 30 injured. Initial findings by the French train company blame a fault on the track.

Mr Hollande was being interviewed by the main French TV channels just after taking part in the annual Bastille Day parade in central Paris.

On the economy, he said that the recovery had begun, adding that industrial production and consumption were rising.

But he refused to rule out tax rises as the government struggles to get the budget deficit down.

“I will increase taxes only if necessary, ideally as little as possible,” he said. 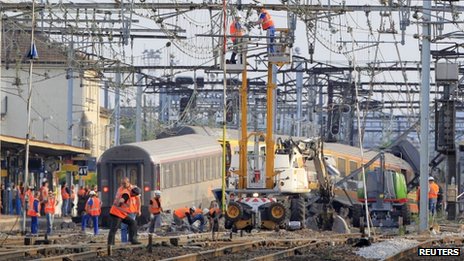 “It moved into the centre of the switch and in this position it prevented the normal passage of the train’s wheels and it may have caused the derailment,” said Pierre Izard, SNCF’s general manager for infrastructure.

Carriages were thrown off the tracks – one mounting a platform – as the train passed through the station at 137km/h (85mph).

Transport routes were particularly busy at the time of the crash, as France began the long holiday weekend.

Those killed were four men and two women, aged between 19 and 82. Thirty people were injured, eight seriously.

A large crane arrived at the site on Saturday evening to lift away the remains of carriages. No other bodies were found. 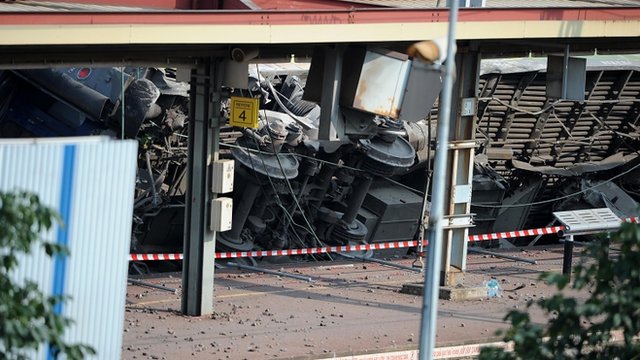 Eyewitness Karim Wone: “You could see the train upside-down”

SNCF said 385 passengers were on board when the train crashed and the station platforms were crowded.

Eye witnesses described the train flying into the air and flipping over. Some said it was like scenes from a “war zone” with people running and screaming.

Transport Minister Frederic Cuvillier has praised the driver of the train on Saturday, saying his quick actions averted a worse accident.

Mr Cuvillier said the driver had “absolutely extraordinary reflexes in that he sounded the alarm immediately, preventing a collision with another train coming in the opposite direction and which would have hit the derailing carriages within seconds”.

The worst railway accident in France in living memory took place at the Gare de Lyon in Paris in 1988, when two trains collided, killing 56 people.