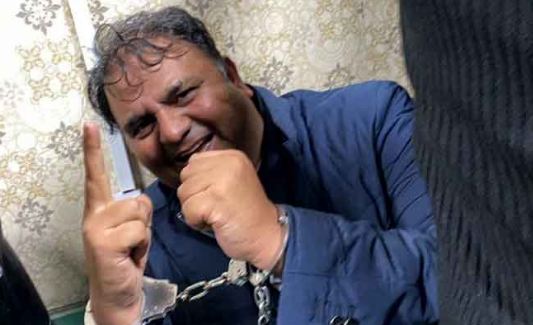 LAHORE: The Lahore High Court (LHC) on Wednesday summoned the inspector generals of Islamabad and Punjab police after the authorities failed to produce Pakistan Tehreek-e-Insaf (PTI) leader Fawad Chaudhry before it.

Fawad was arrested from his residence earlier today after he publicly “threatened” the members of the Election Commission of Pakistan (ECP)  in a media talk outside Imran Khan’s residence in Zaman Park a day ago.

The LHC had ordered authorities to present Fawad before it in response to a petition filed by Fawad’s cousin, Nabeel Shehzad, for the “recovery” of the former federal minister.

Justice Tariq Saleem Sheikh heard the plea and ordered the authorities to present the PTI leader before the court by 1:30pm. The time was later extended to 2:00pm, but the authorities failed to produce Fawad before LHC.

Interestingly, the orders were issued after a local court of Lahore had approved Fawad’s transitory remand in a sedition case filed against him in Islamabad on the Election Commission’s complaint.

At the resumption of the hearing at LHC, Fawad’s lawyer informed the court that the motorcade transporting Fawad has left for Islamabad.

The government’s lawyer said that he is unable to state Fawad’s exact location.

At this, Justice Sheikh asked the lawyer how long it will take for him to inquire about the location.

The lawyer said that he needs half an hour.

“Bring him back even if he is taken to Islamabad,” Justice Sheikh remarked before adjourning the hearing for a while.

When the case resumed, Justice Sheikh inquired where the PTI leader was.

The government lawyer responded saying that that he has spoken to everyone and the PTI leader was not in the Punjab Police’s custody.

“Call IG Punjab,” responded Justice Sheikh. The judge after passing the remarks said that the police chief was not available at the moment.

The judge then issued orders to IGs Punjab and Islamabad to appear before the court at 6pm.

“First present Fawad and then I will hear you,” remarked Justice Sheikh before issuing the summoning orders.

PTI leader Farrukh Habib tried to stop the police motorcade transporting Fawad Chaudhry at the Kala Shah Kaku toll plaza and also engaged in a scuffle with the police in the attempt.

As per details, the Islamabad Police had shifted Fawad to Services Hospital in Lahore for a medical check-up, after which they left for the federal capital despite LHC’s order to present him before it by 2:00pm.

Farrukh was following the convoy and scuffled with the motorcade when it reached the toll plaza. In the videos shared on social media, the PTI leader and workers can be seen blocking the road and standing in front of a police vehicle in order to stop it from moving ahead.

Hours after Fawad’s arrest, the PTI leader was presented before the court of judicial magistrate Rana Mudassir in Lahore’s Cantt.

The former federal minister was presented before the court by the Islamabad Police to seek his transitory remand.

At the outset of the hearing, the prosecution told the judge that Islamabad Police had registered a case against Fawad. The prosecution also urged the court to approve a transitory remand of the PTI leader.

At this, Fawad’s lawyer argued that the distance between Islamabad and Lahore was of just four hours and there was no need for the transitory remand.

“They [police] should just present him [before a court] in Islamabad,” said Fawad’s lawyer. The counsel claimed that the police wanted to get the transitory remand so they could take his client somewhere else.

The counsel also urged the judge to order the police to uncuff his client’s hands. Instead of both hands only one should be handcuffed, he added.

At this, the judge remarked that the lawyer was wasting the court’s time over frivolous arguments.

Fawad’s lawyer also told the magistrate that a habeas corpus plea was pending before a high court and till that is decided his client’s transitory remand should not be approved.

The magistrate then adjourned the hearing for a few minutes.

Once the hearing resumed, the court approved the transitory remand of the PTI leader to transfer Fawad to Islamabad and present him in a court of the federal capital.

However, the police has been asked to conduct a medical of the PTI leader at Services Hospital before he is taken to Islamabad.

Proud of the case: Fawad

Speaking to the media at the court, Fawad said that he is “proud” of the case that has been registered against him.

“Nelson Mandela also faced a similar case. It is being said that I committed treason,” he said.

The PTI leader said that he is a former federal minister and a Supreme Court lawyer therefore he should be treated respectfully.

“The way I was arrested was not appropriate,” he said, adding that he would have appeared before the police had they called him.

He went on to say that the entire country is saying what he said about the ECP.

Confirming the arrest, Islamabad Police said that a case against Chaudhry was registered last night at the Kohsar Police Station in the federal capital on the complaint of ECP Secretary Omer Hamid Khan.

The first information report (FIR) was lodged against him for using threatening language against the ECP and its members.

The PTI leader has been booked under sections 153-A (promotion of enmity between groups), 506 (criminal intimidation), 505 (statement conducing to public mischief) and 124-A (sedition) of the Pakistan Penal Code.

Sections 124-A and 153-A are non-bailable charges while an accused can get bail if charged under sections 505 and 506 of the PPC.

In his speech outside Imran Khan’s residence in Lahore, Fawad warned the ECP, its members and their families, according to the FIR.

The FIR states that Chaudhary said that the status of the election commission was reduced to that of a “Munshi [clerk]”.

Fawad’s arrest comes after the nightlong turnout of PTI workers who rushed to party chairman Imran Khan’s residence to ensure his security after it was claimed that the government is planning to arrest the former prime minister.

“The imported government has gone berserk,” Farrukh Habib said in a tweet. The PTI leader also posted videos on social media of police whisking away Fawad.