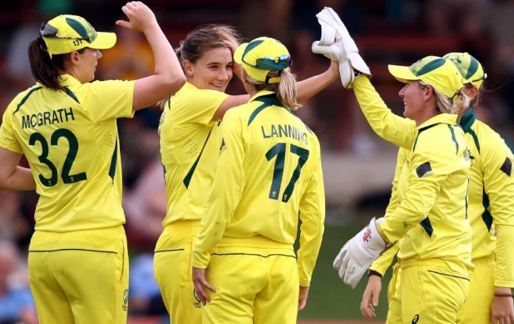 After opting to ball first, Australia team scored 336 for nine in their
50 overs courtesy century from wicketkeeper-batter Beth Mooney. Mooney
top-scored for her side with 133 off 105 balls, hitting 14 fours and
four sixes. Skipper Meg Lanning scored her second half-century in the
series with 72 off 70 balls, smashing eight fours and one six.

For the tourists, Fatima Sana was the most successful bowler with three
53, while Nida Dar and Diana Baig bagged two wickets each. In return,
Pakistan team showed much improved performance with the bat as they
managed to play their full 50 overs and scored 235 for seven – their
joint highest total against Australia.

Pakistan openers provided a solid 61-run start to the innings with Sadaf
Shamas playing her first match in the series scored 30 off 50 balls,
laced with six fours. Her partner and experienced Sidra Amin scored 34
from 66 balls, hitting three boundaries.

Earlier in the day, Tuba Hassan made her ODI debut. She became the 88th
player to play for Pakistan in this format.

Pakistan and Australia will now feature in the T20I series. The
three-match series will begin from Tuesday, 24 January. The match will
be played at the North Sydney Oval.