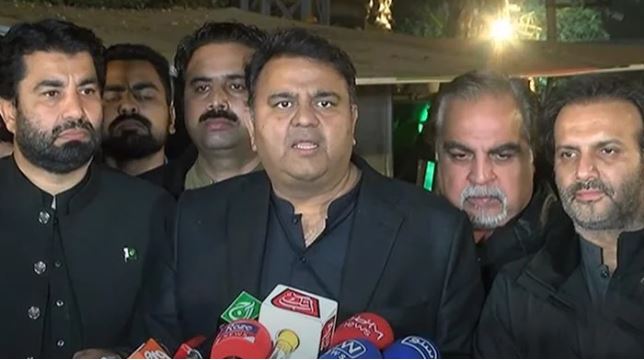 ISLAMABAD, NOV 28: As the government and opposition in Punjab and Khyber Pakhtunkhwa mull strategies to emerge victorious amid the ongoing political crisis, PTI Senior Vice President Fawad Chaudhry said Monday that the party’s leadership has approved the dissolution of assemblies in both provinces.

“As you all know, we are quitting the assemblies. Therefore, the [party’s senior leadership] has approved the decision to dissolve the assemblies,” Chaudhry told journalists in Lahore.

As he called off the long march to Islamabad last week, PTI Chairman Imran Khan announced that his party and allies would quit the assemblies as they wanted to opt out of the “corrupt system”.

Chief Minister Punjab Pervez Elahi — a strong ally of the PTI — also backed the decision and said that he would not wait for a minute to dissolve the assembly if Khan orders him to — putting further pressure on the coalition government in the Centre to move toward early general elections.

While the coalition rulers have ruled out holding general polls in the country before August, the PTI is insisting that the ongoing political turmoil can only be resolved through snap elections.

In the presser today, Chaudhry said that Khan has spoken to Chief Minister KP Mahmood Khan and the PTI chief would hold a meeting with CM Elahi later this week.

“The meetings of the parliamentary parties of both the assemblies have been summoned for later this week, following which, the assemblies will be dissolved,” he said.

Chaudhry said the PTI has kickstarted the process of allotting tickets to politicians, and as the party’s lawmakers resign from their respective assemblies, 563 seats from across the country will be vacated and elections will be held on them.

He said that the opposition will also be invited to hold consultations with the government in both provinces over the formation of the interim government.

Chaudhry said even if elections are held after seven to eight months, it won’t affect PTI due to its popularity, but the party wishes for political stability — which can only be achieved through early elections.

“Therefore, [Prime Minister Shehbaz Sharif] should announce the date for general elections and dissolve the National Assembly. But if you don’t, then PTI will dissolve the assemblies wherever it rules.”

Chaudhry added that the PTI would announce the date of the Punjab and KP assemblies’ dissolution in the next two to three days.

Before Chaudhry’s announcement, CM Punjab Elahi challenged the opposition to table a no-confidence motion against him as the latter began talks on its strategy to send the provincial government packing.

In a statement, the chief minister said PML-Q and PTI have a combined 191 lawmakers in the Punjab Assembly, and they are enough to defeat the opposition’s moves.

CM Elahi added that the governor’s rule can also not be imposed while the assembly’s session is going on.

He added that the opposition is in minority and will remain there. “They do not have the guts to table the no-confidence motion. But if they still wish to, they can go ahead and table it.”

In a press conference today, PML-N leader Ata Tarar said that the coalition parties would adopt all the political and legal options to prevent the assemblies from dissolution.

He made the remarks following a PML-N parliamentary advisory committee meeting held with Hamza Shahbaz in the chair.

Referring to a plea filed by Hamza Shahbaz in the Lahore High Court (LHC)against the election of PTI’s Sibtain Khan as Punjab Assembly speaker, he pleaded with the court to hear their case.