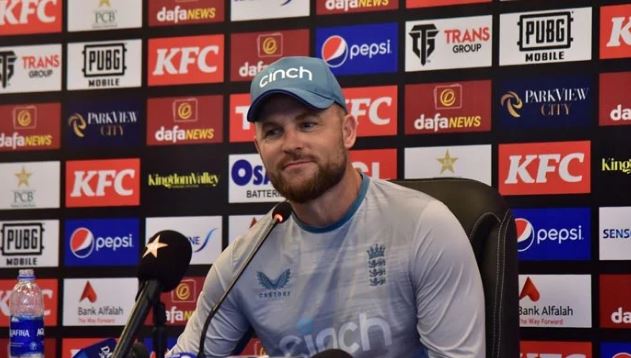 RAWALPINDI: England head coach Brendon McCullum said that his side will be looking to play result-oriented cricket in the three-match series against Pakistan.

Speaking to media at the Rawalpindi Cricket Stadium ahead of the first Test, McCullum said that Pakistan is a great place to tour and it’s been starved of international cricket for a long period of time.

“We understand how passionate the people are here in Pakistan about the sport of cricket and we understand the obligation that we have as an England side. We’re looking forward to playing an entertaining style of cricket which hopefully ends up in results whether that’s in our favour or in Pakistan’s favour,” said the former New Zealand captain.

“I don’t know if we’re going to win the series. I can almost guarantee when the skipper comes in 48 hours’ time he will say that there’ll be no draws in the series, we’ll certainly be pushing for results because we see it as our obligation to try and ensure that people walk away entertained and if we get beaten then Pakistan would’ve played well. I expect us to play well. If we get outplayed that’s okay too, but looking forward to the opportunity looking forward to the challenge,” added McCullum.

When asked if pitches in Pakistan would force England to modify their traditional aggressive approach in Test cricket, the head coach said that they’ll find a way out but added that the team always respect the conditions.

“We know that it may not necessarily be as prominent, the aggressive cricket as what we’ve seen in the past, but there’ll be opportunities to try and play positively and when that does arise, I expect the guys to try and take that on,” said the coach.

McCullum added that it is important to entertain people even in red-ball cricket and that’s why he has adopted the aggressive approach in the longer format of the game as well.

“We see an obligation to try and ensure that if people turn on the TV anywhere around the world, or they pay their money, their rupee or the pound, to come and watch your play, then they’re going to get entertained. And for us, it’s about trying to play that style. It’s not always going to be successful, we know that but I think what we’ve seen in a short period of time is that it can unlock your skill.”

“I think in this game we can we can suffocate ourselves a little bit by the want or the willful results, and we’ve to stymie our ability for our talent to come out,” he added.

Talking about the three-match series with Pakistan, McCullum said that he expects his side to be prepared in time before the first test which starts on December 1 in Rawalpindi.

He also confirmed that Mark Wood will miss the first Test in Rawalpindi but is likely to be available for Multan Test.

“We’ve got a couple of days. It’s nice to be here. And we had a great camp and Abu Dhabi and spent lots of time together as a team sort of trying to build that camaraderie back after a little bit of a break, which we identified throughout the English summer that that’s a really important component to how this team is going to operate,” the head coach of England’s Test side said.

“Mark Wood obviously will not make it to the first test squad unfortunately because of his injury but we expect him to be ready for the second test otherwise, we’ve got a full squad to pick from.”

“The pitch looks good but is expected to change over the next couple of days. See how things scrub up. I think one of the things we’ve talked about is that we just adapt to whatever we are given, and not too stuck in our preconceived thoughts. Just play what’s in front of us and be prepared to adapt accordingly. But I’d anticipate the pitch will be a pretty good wicket. But we’ll just have to wait and see,” he said.

Replying to a question, he said that to be able to win a Test series against a strong side in away conditions is something every cricketer would want to achieve in their career.

“To win away from home is the greatest accomplishment you can achieve as a test player and as a test side. We understand the size of the challenge in front of us but that’s great. That’s where you want to play the game for, you don’t want easy challenges, you want to take on the best and their own conditions and you want to try and test where you’re at as a side and I’m really excited,” McCullum pointed.