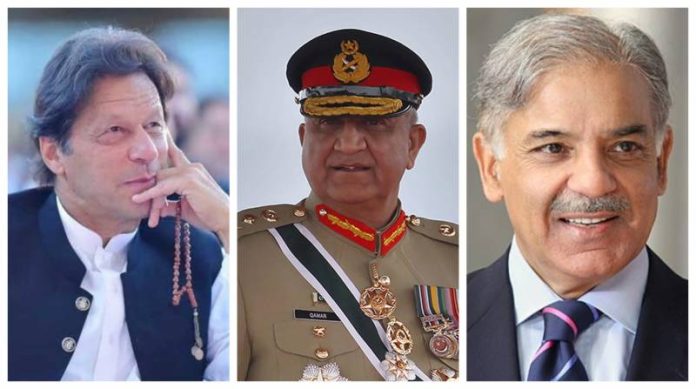 ISLAMABAD: Political uncertainty continues to grip the country amidst PTI Chief Imran Khan’s recent Tweet that he will take more names who according to him are involved in attack on him. At one point it seemed as if things have settled down with regards to registration of FIR against three persons including the Prime Minister and the Interior Minister and an army officer however after his new Tweet things appear to have turned even more complicated. The scope and ambit of the fight is now likely to be broadened, which means future of politics in Pakistan may become bleak.

The long march has started again albeit Imran Khan not leading it because of injuries but he promised his supporters that he will be with them when the march reaches Rawalpindi. Sources believe, the PTI may not enter Islamabad before the visit of Saudi Crown Prince Muhammed Bin Salman who is expected to arrive on November 21. If so happens, it would of course be a good omen with regard to relations between the PTI and Saudi Arabia. As mentioned in an earlier piece, during PTI government Saudis chose to keep a distance from Imran Khan for a variety of reasons. Anyhow, it is a good opportunity for the PTI to mend its fences with the Kingdom by allowing smooth happening of the Crown Prince visit. During PTI famous 120 dharna, during the Nawaz Sharif regime, the party was severely grilled for hampering visit of the then Chinese president Xi therefore it is expected that the party may not repeat the same mistake. Like Saudi Arabia, China also happens to be a friend that has always stood with Pakistan whenever Islamabad needed it.

The Prime Minister Shehbaz Sharif met with Nawaz Sharif in London few days ago. It was a closed-door meeting however sources privy to the development revealed that future political scenario as well appointment of the new army chief were the topics, which came under discussion during the meeting. Sources claim, the PML N leaders decided to stick to the principle of seniority in the appointment of the army chief, which means Lt. General Asim Munir stands bright chances or at least the PML N camp wants him to be the new army chief. As media reports suggest, PTI and especially Imran Khan may not be comfortable with this appointment albeit he has announced that he and his party had nothing to do with the appointment of the chief but we all know this statement is just for public consumption.

When it comes to appointment of the army chief one thing needs to be kept in consideration that by and large a person who is never discussed for the post but he is still in the queue, is often picked up for the job. General Waheed Kakar, General Jehangir Karamt, General Asif Nawaz, General Musharraf, General Kayani, General Raheel Sharif and General Qamar Javed Bajwa were all less discussed when the appointment was to be made but then we saw them rising to the coveted slot. In present case the President of NDU Lt. General Nauman may prove a dark horse. Despite being in the list of probables for the job he is least discussed.

We have to keep in mind that PTI Chairman Imran Khan wanted General Bajwa to continue till the time of next elections. He had made this announcement publicly during a rally in Faisalabad. Nevertheless, the incumbent has expressed his willingness to doff off uniform at the stipulated time i.e November 29, 2002 but things may take dramatic turn if the long march poses threats to the federal government and consequently emergency is imposed in Punjab and KP provinces.

As regards the holding of elections or at least announcement of the date for the fresh elections as demanded by PTI, it seems uncertain that the PML N and its allied parties would prefer to go to elections at this time. It was also unanimous view during the London meeting that PML N especially cannot afford elections at this particular juncture when wind is already blowing in favour of the PTI. The option of continuing with the government is also difficult because the PML N and its allied parties had not been able to perform well.  The ruling parties however are of the view it is better to continue with the government no matter how bad is this option, rather than announcing fresh elections and consequently paving the way for the PTI to take over for next five years.

The PTI instead wants removal of this government sooner rather than later. Even if the government is sent packing as a result of PTI long march or any other reasons, immediate elections may not be possible. Analysts believe, allowing PTI to have two-thirds majority in the elections may not augur well for the future of the country, especially keeping in view the past performance of the party. The only viable option to stop PTI from getting absolute majority happens to be creation of a level playing field in which PML N leader Nawaz Sharif and Maryam Nawaz will have equal chances of contesting the upcoming elections. This is a preposition at present and needs to be fined tuned before it comes into practice.

The corps commanders met on November 9, 2022 though no formal communiqué was issued about this meeting. As per media reports, the commanders sought to adopt a wait and see policy regarding present happenings in the country. Meanwhile the defence secretary is on leave and a summary for the appointment of the new army chief can only be moved when the defence secretary returns to Pakistan. He is expected to rejoin after November 20, which means the process may start in the third week of November.