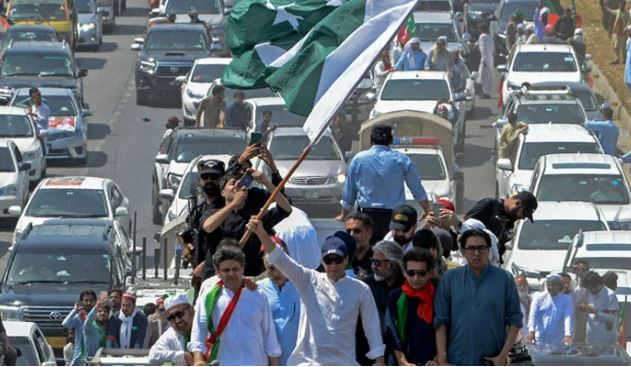 ISLAMABAD: The Supreme Court Tuesday approved the federal government’s contempt of court petition against the PTI chief after he announced his long march to the capital.

PTI Chairman Imran Khan has warned the government that he has given it “some time” to take a decision on announcing the date for the general elections, otherwise, he will move towards Islamabad — and the march will not be delayed beyond October.

But undeterred by the former prime minister’s repeated warnings, the federal government reprimanded Khan and warned him against marching to the capital.

A top government official told the PTI chairman that even if he has won the October 16 by-elections — in which he created history by winning six National Assembly seats simultaneously and called it a “referendum” on his popularity — it does not give him the right to march to the capital.

If the PTI holds another long march, then it would be the second time they would be coming to Islamabad. The last march was held on May 25 and ended with Khan abruptly calling off the march after reaching Islamabad.

The federal government last Thursday filed a contempt of court plea against the PTI chairman in the Supreme Court over his long march call to Islamabad.

In its petition, the federal government told the apex court that the PTI chief is making announcements of marching towards Islamabad, which was a violation of a court order.

“Imran Khan is making announcements to attack Islamabad,” says the plea. It urged the Supreme Court to direct the PTI chief to ensure the implementation of its orders related to protests and sit-ins.

The petition has been filed by the interior ministry on behalf of the federal government.

In a press conference on Monday, Khan said that his party’s anti-government “Azadi March” would not be delayed past October as they have completed their preparations.

The PTI chairman said: “My march will be held in October if the government does not announce the date for the next general election.”

The PTI chief warned the government that multitudes of people would take to the streets responding to his call to the nation for the anti-government march.

Khan said he was still cutting the government some slack so that they could decide on it. “I am actually giving them some more time before embarking on our long march protest.”

“[Interior Minister] Rana Sanaullah won’t even know what hit him, such is my preparation,” Khan warned the top minister, who recently claimed the government’s preparation was 10 times more as compared to May 25.

He said dialogue was out of the question with the ruling elite. “There’s no negotiation with criminals. You can hold reconciliation talks with Baloch or Sindhi nationalists, but not with the felons like them,” Khan added.

Sanaullah had warned that the government would multiply its May 25 policy by 10 if the PTI chairman announces another long march.

Speaking to the media in Faisalabad, the minister also offered an olive branch to the PTI saying that the government is ready for conditional talks with Khan but there would be no unconditional dialogue.

Sana added that it was unacceptable that anyone could come to occupy Islamabad whenever they wanted.

“If Imran Khan wants to hold a long march, he should apply for it. Under Section 144, no one is allowed to roam around with arms, but I found out that the president of the Faisalabad District Bar was roaming in NA-108 with armed people,” he said.