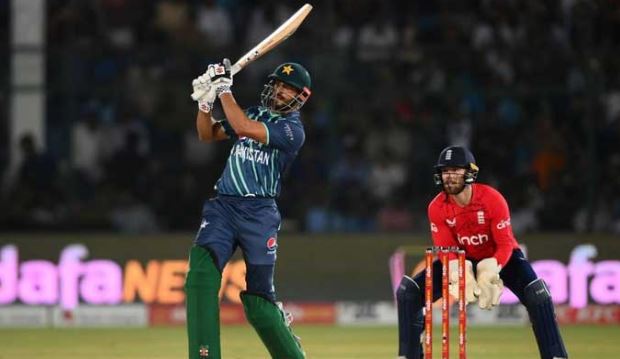 KARACHI: After losing the third T20I fixture by 63 runs, the Green Shirts are desperately looking to win the fourth game of the historic seven-match series against England today (Sunday).

The high-octane clash between Pakistan and England is scheduled to be played at the National Stadium in Karachi at 7:30pm.

The Pakistan team is eyeing a win to level the series as England is leading the series 2-1 with four games in hand.

Pakistan face big issues both in their bowling and batting which is a big question mark over the team’s make-up ahead of the T20 World Cup which will begin in Australia next month.

While England continue to test their healthy bench, Pakistan are not being able to do so due to lack of top stuff on the bench and injuries to some key players.

In the third show on Friday, Pakistan went unchanged while England made three changes, bringing in pacers Reece Topley and Mark Wood, who both clicked.

Debutant Will Jacks left a big impact with the bat, scoring a 22-ball brisk 40 which set the momentum for Harry Brook (81*) and Ben Duckett (70*) who shared a 139-run unbroken partnership — the fourth highest stand for the fourth wicket in T20Is.

Pakistan’s bowling lacked discipline which helped the visitors post a huge total of 221-3 in the allotted 20 overs.

Then Pakistan lost four top-order wickets with only 28 on the board. Pakistan crumbled under pressure and managed only 158-8.

Shan, who made his debut in the opening game of the series, played a few superb strokes and his intent against the spinners was a great sign for the hosts who at least found someone who could carry the middle order burden in time of chaos. However, the team needs a few more to strengthen the middle order which has been exposed repeatedly in recent matches.

Khushdil showed some spine but Iftikhar Ahmed failed again when he was expected to carry the batting load.

Pakistan will need to test at least one uncapped player irrespective of the outcome as this is the only stage to finalise the chemistry of the brigade ahead of the big event.

Bowling always has been Pakistan’s strength and if such a huge score is set by the oppositions as was done on Friday then certainly the fragile batting will not be able to chase.

England, also battling injuries to some of their key exponents including skipper Jos Buttler, will be looking to extend the lead. England have proved in the series that they have strong back-up players who can fill the void.

Pakistan will need to do well with the ball if they are to win the game keeping in view the issues in their batting line-up.

It will be the last show on Sunday (today) of the Karachi leg. The teams will move to Lahore to engage in three final matches which will be held at the Gaddafi Stadium on September 28 and 30 and October 2.