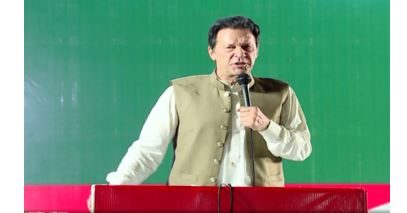 Imran Khan to be indicted in contempt case

Once the court took a five-minute break after the reservation of the verdict, Khan got up and asked the court if he could speak. At this, the IHC CJ said that the court had heard his lawyers.

“I want to give my stance; the court can question me,” Khan said, but the court prefered to let it be and decided against listening to the PTI chairman.

At the last hearing, the IHC chief justice had asked Khan to ensure that he submits a “well-considered” response in seven days to the show-cause notice, otherwise the court would have its way.

In his first response to the IHC’s show-cause notice in the case, the PTI chairman did not apologise, offering, however, to withdraw his remarks “if they were inappropriate.”

In his latest response, which was a 19-page-long document, the PTI chairman seemingly opted to tell the court that it should discharge the notice based on his explanation and follow the Islamic principles of forgiveness.

However, in both responses, the PTI chairman did not offer an unconditional apology.

During the hearing, the IHC chastised the PTI chairman, saying that the former prime minister seeks to “constantly justify” his actions, in a case pertaining to contemptuous remarks he made about a magistrate in a rally speech.

“It appears you have no realisation of the gravity of the situation,” said IHC Chief Justice Athar Minallah.

Expressing his disappointment in the response given by Khan to the court, which was the second of its kind, the court asked: “Even after the court’s input on the matter, this is the response submitted?”

“It seems you want to fight this case […] and you have no realisation that the case against you is extremely seriously,” noted Justice Minallah.

Justice Sattar noted that “threatening” words were used by Khan in his speech, that he showed “no remorse”, and that recent statements also seem to suggest he has “no remorse”.

The court regretted that Khan, instead, is constantly attempting to “justify” his actions.

The PTI chair appeared before a five-member IHC bench amid strict security measures in place in and around the premises of the court, including the deployment of 788 cops under the supervision of two superintendents of police.

Moreover, the ways leading to the court have been barricaded with barbed wires, while the availability of tear gas shells and an armoured vehicle has also been ensured to deal with any untoward situation.