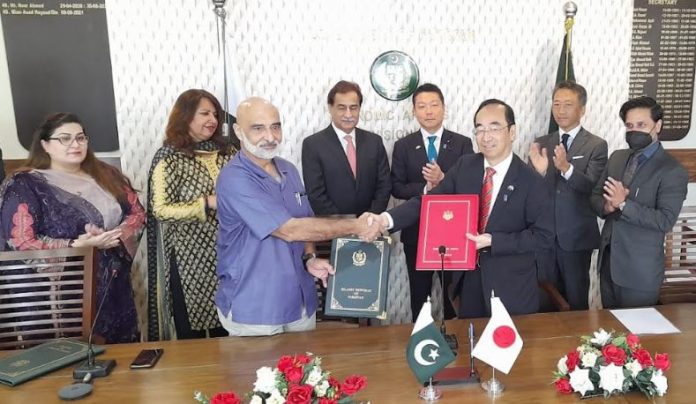 ISLAMABAD, AUG 3 /DNA/ – The Government of Japan has agreed to provide new grant assistance worth 1,236 million Japanese Yen (Equivalent to around 9.062 million USD / around 1,855 million PKR) for upgrading the mechanical system for sewerage and drainage services in Multan.

On August 3, 2022, in the presence of the Parliamentary Vice-Minister for Foreign Affairs of Japan, H.E. Mr. HONDA Taro, on a visit to Pakistan, a signing ceremony for the assistance was held at the Ministry of Economic Affairs in Islamabad. H.E. Mr. WADA Mitsuhiro, Ambassador of Japan, Mr. KINOSHITA Yasumitsu, Chief Representative of JICA, H.E. Sardar Ayaz Sadiq, Minister for Economic Affairs, Mr. Mian Asad Hayaud Din, Secretary, Ministry of Economic Affairs, and other officials from both countries attended this ceremony.

Multan city has faced constant flooding of roads in the urban areas due to frequent sewer clogging, causing road closures and sanitary problems. Although the Water and Sanitation Agency (WASA) Multan continues to enhance their sewerage services through repairing their old equipment for cleaning sewer pipes and relocating reusable equipment to where most needed, it has been difficult to adequately respond to citizens’ requests for preventing sewer clogging.

This grant project will address the above issues by upgrading the sewerage equipment, such as cleaning equipment and drainage pumps, to effectively maintain the sewer pipes and channels. This will help improve sewerage services and contribute to sustainable sanitation in the region.

In the signing ceremony, the Parliamentary Vice-Minister HONDA stated, “I am delighted to be able to visit Pakistan on the unique occasion of the 70th anniversary of the diplomatic relations between Japan and Pakistan. I will make every effort to strengthen the friendship between the two countries by continuous development cooperation, especially in the sectors such as water supply and sewage, disaster prevention, health, and education, as well as by promoting people-to-people exchanges and expanding trade and investment.”

H.E. Sardar Ayaz Sadiq, Minister for Economic Affairs, Government of Pakistan, expressed his deepest appreciation to the Government of Japan for its generous support, especially given the Japanese high quality and extensive development cooperation for decades.

Japan has provided development assistance to Pakistan since 1954, totaling $11.7 billion.