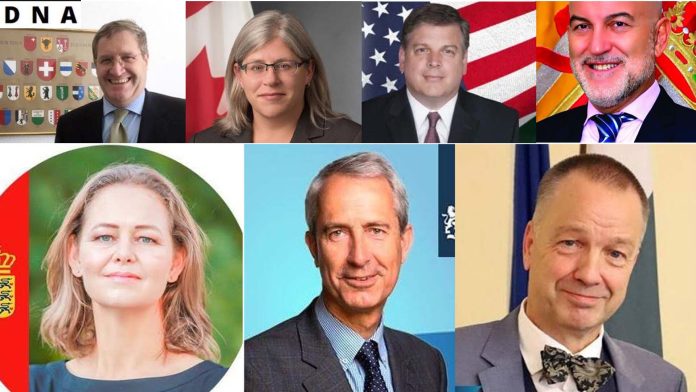 US Ambassador Donald Blome is yet to present his credentials

ISLAMABAD: Ambassadors of various European countries are set to leave Pakistan after completing their term. Those who are leaving include Ambassadors of Switzerland, Germany, Austria, Belgium, the Netherlands, Denmark, and Spain and Canadian High Commissioner Wendy Gilmour. While the Deputy Head of Mission of Jordan embassy Dr Maen is also leaving.

The Danish ambassador Lise Rosenholm perhaps is the first among these to leave. She is scheduled to leave within the next few days. Interestingly, she has not paid any courtesy call yet on any of the government officials including the Foreign Minister or the President of Pakistan. The Spanish ambassador Manuel Duran a few days ago met with the Chief of the Air Staff Air Chief Marshal Zaheer Sidhu while he is expected to meet with other officials as well.

The outgoing Spanish Ambassador Duran who spent an eventful tenure in Pakistan has been assigned a new job in Montenegro. He is expected to assume his new responsibilities somewhere in August this year after having some break at home. During Ambassador Manuel Duran’s tenure the Spanish embassy in collaboration with Pakistani authorities hosted a number of cultural events. He is the one who actually brought famous Flamenco dance to Pakistan. The recent performance held in association with the Islamabad Club provided a real feast to the music lovers and especially the Flamenco dance admirers.

Ambassador of Germany Bernard Schlagheck will leave Pakistan in two weeks time. Ambassador Schlagheck, like his predecessors, dedicated some portion of his tenure to explore the real Pakistan.  Mixing up with ordinary people; being part of traditional Pakistani rituals and enjoying road-side delicacies during his visit to far-off areas were his few acts that made him so popular in Pakistan. Besides, he is the one who broke the news of Pakistan’s being taken out of the grey list a few days ago during his interaction with some senior journalists. Germany indeed played a key role in this regard.

Ambassadors of Austria and Belgium will leave too in near future, while Ambassador of the Netherlands Wouter Plomp is also included in the list of outgoing ambassadors. Had there been no pandemic, these ambassadors, for sure, could have contributed more regarding strengthening of bilateral relations. A bad patch in EU-Pakistan relations was witnessed when the EU ambassadors issued a press release asking the then Prime Minister Imran Khan and his government to criticize the Russian govt for its aggression against Ukraine. The then prime minister considered the letter or press release as an interference in Pakistani affairs hence he issued a strong-worded reply, which ostensibly was not taken well by the EU missions. The main proponents of the resolution happened to be the women ambassadors including the then US Charge d Affaires, Canadian HC, the then EU ambassador and the Danish ambassador. Some of them have already left Pakistan and the rest will leave soon.

Ambassador of Switzerland Benedict de Cerjat’s tenure also comes to an end. The ambassador is retiring from service. During his tenure relations between Pakistan and Switzerland got an added impetus. His primary focus remained on building new linkages and strengthening people to people contacts. Like the German colleague, he too was fond of exploring Pakistan for which he traveled to even far flung areas of the country.

The new US Ambassador Donald Blome has already arrived however he has not yet presented his credentials. There are some reports that the President House is yet to give a date to the US ambassador for presentation of his credentials. The Ministry of Foreign Affairs, a few days ago, denied reports that there was any deliberate delay on the part of the President House. By and large, the US and the UK envoys when they arrive in Pakistan their credentials are accepted the very next day. Since it did not happen in the case of the current US ambassador that is why some media houses carried the news as if Ambassador Blome was made to wait for a long time. He is likely to present his credentials on July 2 but the President may receive him even earlier.

The Canadian High Commissioner Wendy Gilmour is scheduled to leave in August this year. The new EU ambassador will also arrive shortly. Originally she is from Estonia however has served in various EU institutions. The outgoing batch of the envoys remained a bit unlucky in the sense that due to the corona pandemic they could not contribute much with regard to promotion of bilateral relations.