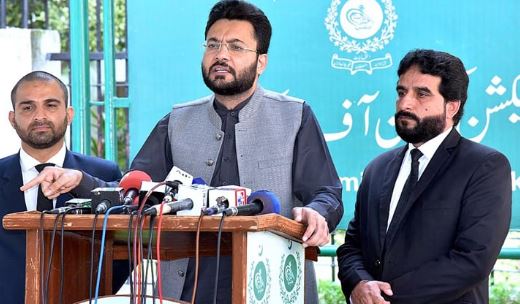 ISLAMABAD: /DNA/ – Pakistan Tehreek-e-Insaf (PTI) Central Secretary for Information Farrukh Habib demanded that the security committee report regarding Pakistan Muslim League-N (PML-N) and Pakistan People’s Party’s (PPP) foreign funding should be submitted before the Election Commission of Pakistan (ECP) sans any further delay.Talking to media here on Wednesday, he said that they had been waiting for submission of the report for the last one month but both the parties resorted to delaying tactics, which was against the law.He said that the PTI foreign funding case was being heard on daily basis but PPP and PML-N adopted various strategies to hide their party accounts, demanding that the ECP should bring the scrutiny committee report of both the parties to the fore and initiated hearing of their case on daily basis.Farrukh Habib said that there was clear orders of the court that cases of all the parties should be heard indiscriminately and fairly.  Talking about the problems currently facing the country, he said that everything was moving quite smoothly and economy was doing well as all the economic indicators spoke volume about it, which was even admitted by the new Governor State Bank of Pakistan.He stated that PTI government under Imran Khan’s visionary leadership started various public welfare initiatives to provide maximum relief to the rank and file.However, he said that external conspiracy was hatched and ousted the elected government to impose the government of ‘Shahbaz Speed’, who made the life of commoners a hell during his 60 days of rule through back-breaking inflation and prolonged load shedding.Farrukh Habib said that there was zero load shedding and prices were under control but now after the imposition of the imported government, there was unprecedented power outages and unbridled price hike.He said that Shahbaz Speed did five foreign visits but of no good but he was more interested to remove his name from ECL. Farrukh said that the imported government changed FIA investigative prosecutors and amended the NAB law under a well-planned strategy to eliminate corruption cases against Shahbaz Sharif and his family.Farrukh Habib went on to say that Shahbaz Speed was heading the country towards bankruptcy and severe crisis; therefore, snap and transparent polls should be held at the earliest to pull the country out of prevailing untold crisis.