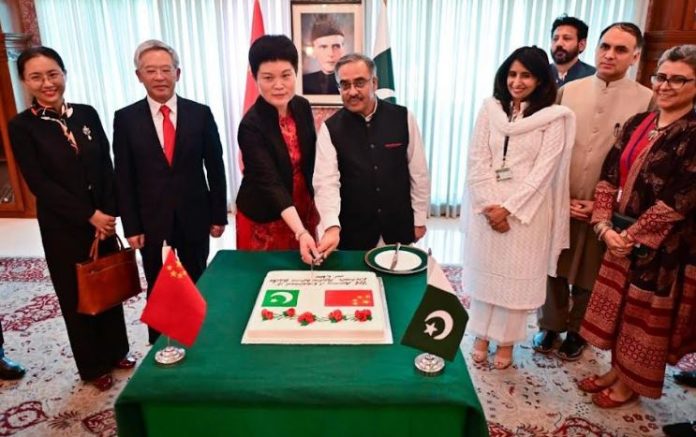 ISLAMABAD, MAY 21 /DNA/ – Today marks the 71st anniversary of the establishment of diplomatic relations between Pakistan and China. To commemorate this occasion, a cake-cutting ceremony was held at the Ministry of Foreign Affairs.

Foreign Secretary Sohail Mahmood, Chargé d’Affaires of the People’s Republic of China Pang Chunxue, senior officers of the Foreign Office, and Chinese diplomats participated in the ceremony. In his remarks, the Foreign Secretary underscored that the multifaceted, time-tested relationship with China was a cornerstone of Pakistan’s foreign policy. He noted that bilateral relations between Pakistan and China were marked by exceptional trust, mutual respect, and mutual support.

Over the course of the past seventy-one years, these relations had grown from strength to strength and matured into an unbreakable, All-Weather Strategic Cooperative Partnership.

The Foreign Secretary added that both Pakistan and China were committed to enhancing the all-encompassing bilateral relations to the benefit of the people of both countries. He reaffirmed Pakistan’s resolve to further deepen the ‘iron-brotherhood’ between Pakistan and China and elevate the growing partnership to newer heights.