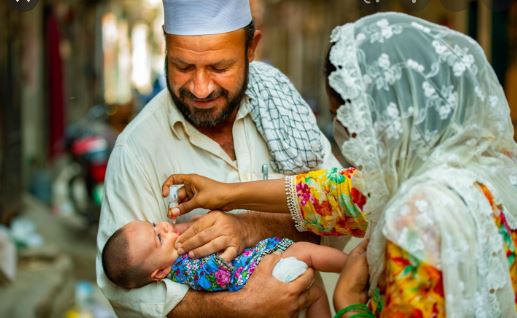 PESHAWAR: Additional Secretary Health (polio) and Coordinator Emergency Operations Center Khyber Pakhtunkhwa Abdul Basit renewed resolve for polio eradication saying that the government stand committed to wiping out the scourge from the last endemic region by vaccinating every eligible child against the crippling virus of polio.

He said this while kicking off May round of anti-polio drive here Friday at EOC Headquarters by administering polio and vitamin A drops to the children.

Talking to media, Abdul Basit said provincial government was taking every measures to address ground challenges specially in the southern belt of the province and ensure conducive environment to frontline workers to achieve the target of vaccination.

He said that polio eradication is our national responsibility and is a matter of our children’s health that needs serious and concerted efforts by all stakeholders.

“May round of anti-polio drive is of critical importance given the reporting of three cases from North Waziristan and presence of virus in the environment”, he added.

EOC Coordinator informed media that during the May campaign over 7.28 million eligible children will be vaccinated against polio for which a total of 30981 teams have been established out of which 27763 are mobile teams, 1908 fixed teams, 1161 transit and 149 roaming teams.

He said that adequate measures have been taken to ensure security to the teams and over 40 thousand law enforcement agencies (LEAs) personal will be deployed in the May campaign at various plugging points and with teams.

The campaign will be carried out in all districts of the province including Afghan Refugees camps from May 23, 2022, he said.

“People should not adhere to anti-polio propaganda by vested elements as ensuring healthy life to children was the prime obligations of the caregivers and every responsible citizen of the country”, he stated.

Earlier, he administered anti-polio drops to the children to formally inaugurate the May round of polio campaign in the province.