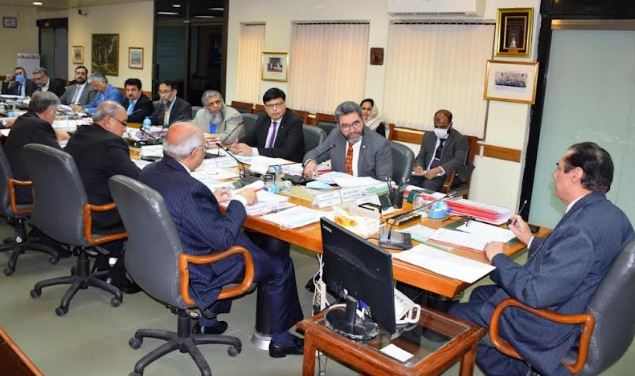 Islamabad:-May 16 (DNA ):- A meeting of NAB was held and reviewed four years overall performance of NAB.
The honourable NAB Chairman lauded overall performance of NAB.
NAB has been made a functioning institution by introducing various new reforms while all resources are being utilized to eradicate corruption from the country. Honourable Chairman Mr Justice Javed Iqbal expressed these views while presiding over a review meeting on the overall performance of all NAB regional bureaus at NAB headquarters.
The meeting was attended by NAB Deputy Chairman Zahir Shah, Prosecutor General Accountability Syed Asghar Haider, DG Operations Masood Alam Khan and other senior NAB officials.
The directors general of all regional bureaus attended the meeting via video link.NAB Chairman is working hard to bring corrupt elements to justice.

The Honorable Accountability Courts convicted 1405 accused due to effective prosecution of all the regional bureaus of NAB in collaboration with NAB operations and prosecution division.
It was informed during the meeting that from October 2017 to December 2021, under the competent leadership of NAB Chairman Mr Justice Javed Iqbal, NAB has recovered a total of Rs 584 billion directly and indirectly from corrupt elements.
In addition to awareness, prevention and enforcement, the NAB has taken several steps in addition to formulating an effective and comprehensive anti-corruption strategy based on the slogan of Faith of NAB Corruption Free Pakistan and commitment to “Accountability for All”.
According to the Gilani & Gallup poll, 59% of people trust NAB. NAB’s outstanding performance has been appreciated by reputable national and international organizations such as Transparency International, World Economic Forum, Global Peace Canada, PILDAT and Mashal Pakistan.
The Government of Pakistan has appreciated the efforts  to improve the ranking of FATF / APG members, especially in the preparation of follow-up reports.
This helped the FATF Coordinating Committee Pakistan to complete its work on time.
Right now as many as 1,237 references of corruption are being heard in accountability courts across the country, the value of which is approximately Rs. 1335.019 million.
The overall conviction ratio of NAB in accountability courts is 66.8%.
It was further informed at the meeting that NAB has set up a combined investigation team system to further improve the quality of inquiry and investigation based on solid evidence, documentary evidence and witnesses and to benefit from the collective wisdom of senior NAB supervisory officers.
The NAB has fixed 10 months for expeditious disposal of corruption cases, 2 months for complaint investigation, 4 months for inquiry and 4 months for investigation.
NAB has set up a state-of-the-art forensic science laboratory to facilitate investigations and prosecution.
NAB has set up Pakistan Anti-Corruption Academy at NAB headquarters to provide training to investigative officers and prosecutors on modern basis for effective follow up of NAB cases in accountability courts and investigation of white collar crimes.
In addition to the Complaints Cell, the NAB has set up Witness Handling Cells in the Regional Bureaus to review pursue corruption cases in relevant accountability courts on basis of concrete evidence.
NAB has been instrumental in advancing Pakistan’s commitments at the international level.
The NAB, as a signatory to the United Nations Convention against Corruption (UNCAC), has set up a cell to combat money laundering and terror financing.
Pakistan is the first chairman of the SAARC Anti-Corruption Forum. NAB has signed a memorandum of understanding with China to monitor ongoing projects in Pakistan under China Pakistan Economic Corridor (CPEC).
NAB Chairman Honourable Mr Justice Javed Iqbal reiterated his commitment to implement “Accountability for All” to eradicate corruption from the country following the policy of zero tolerance and self accountability.
It was also informed in the meeting that during the tenure of the present administration, NAB has launched a public awareness campaign against corruption using various platforms.
The NAB has identified shortcomings in the procedures of various federal and provincial agencies, ministries and other government corporations and autonomous bodies and made recommendations for action.So that flaws can be overcome to eradicate corruption.
NAB has signed a memorandum of understanding to create awareness among students in universities so that the future leadership can be made aware of the ill effects of corruption as per the vision of chairman NAB.
NAB has set up more than 50,000 character building societies in universities across the country, which are playing a vital role in anti-corruption awareness activities. NAB Chairman Mr Justice Javed Iqbal has 40 years of experience from Sessions Judge Quetta to the post of Acting Chief Justice of Pakistan.
During the last four years as NAB Chairman, NAB’s performance has not only been excellent but also its prestige has increased.
The NAB has brought the corrupt elements to justice and recovered the looted money and deposited it in the national treasury which reflects the hard work, commitment, merit and transparency of all the officers of NAB.They are fighting the war on corruption by considering it as a national duty. NAB hopes that with collective efforts corruption can be eradicated. We must leave a prosperous and developed Pakistan for our future generation.