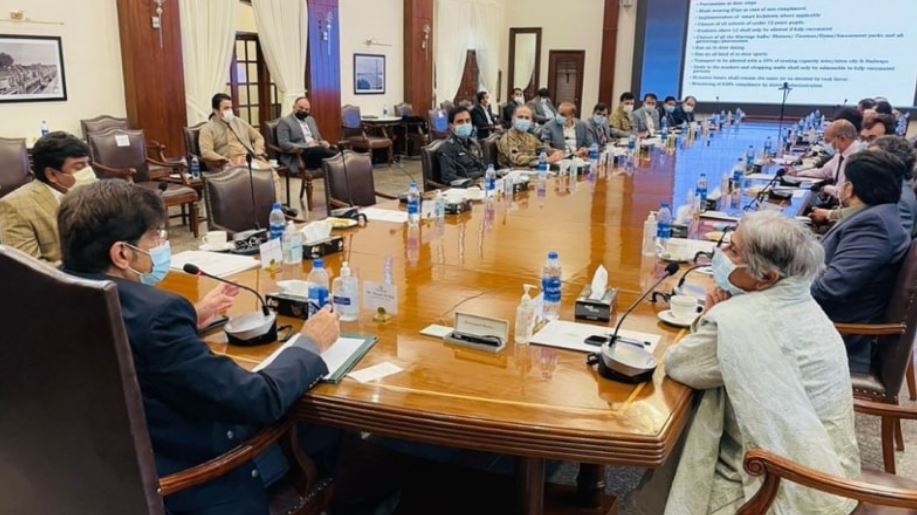 KARACHI: The Sindh government on Saturday decided that schools across the province will remain open even as the Omicron-driven fifth wave of Covid-19 spreads at an alarming rate.

The decision to continue educational activities was taken in a meeting of the Provincial Task Force on Covid-19 presided over by Sindh Chief Minister Syed Murad Ali Shah.

The meeting’s participants also decided that all public and private hospitals will be surveyed in order to determine their current capacities and to ascertain what more is needed.

The government officials who do not wear masks would be fined, which, it was suggested, could be equal to their one day’s salary.

Additionally, it was instructed that food at wedding events would be served in boxes.

Meanwhile, only vaccinated people would be allowed to enter markets, with the management required to check the record of vaccination cards.

It was also decided to further speed up the pace of vaccination efforts across the province.

“The increase in Covid cases is the result of not taking precautionary measures. If the people cooperate, then this ongoing Covid wave will also be brought under control,” the chief minister said.

The meeting participants also decided that restaurants will be monitored and action be taken against those that did not comply with Covid SOPs.

Another session of the task force will be held after a few days, with the chief minister adding that further decisions will be taken upon a review of the situation then.

The guidelines today came after Sindh authorities on Friday seemed undecided about taking harsh measures, including lockdowns, saying they were closely monitoring the situation.

“The number of deaths and hospitalisation hasn’t increased the way [it did last year], though the burden of infections has risen dramatically,” CM Murad had told reporters at the Dow University of Health Sciences.

Asked about the possibility of a lockdown or closing schools and other educational institutions due to a spike in Covid-19 cases, he had said the health facilities were not under pressure right now and that the provincial government was in contact with the National Command and Operation Centre (NCOC) for decisions.

According to the federal and provincial data, Karachi reported 2,816 cases over the last 24 hours while Sindh reported a total of 3,089 cases. The figure for Sindh was the highest number of daily infections since the pandemic began. The previous highest for daily infections in Sindh was reported on June 11, 2020 — during Pakistan’s first coronavirus wave — when 3,038 infections were detected in the province.

Meanwhile, Pakistan reported 4,286 new Covid-19 cases in the last 24 hours, up 20 per cent from yesterday’s 3,571 infections. It was the highest daily caseload since August 28 when 4,467 cases were confirmed.

The latest surge in cases is being driven by the Omicron variant of the coronavirus which has triggered a fifth wave of the disease in the country.

In light of the recent surge in cases, Pakistan has started administering booster doses to the population. Earlier on Friday, the NCOC further reduced the age limit for booster jabs.

“From tomorrow (Saturday) onwards, citizens over 18 years will be eligible for a free booster dose of their choice. Booster (one dose) will be administered after a six-month gap from complete vaccination,” the forum had said.