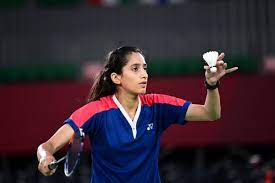 KARACHI , JAN 05: Mahoor Shahzad, Pakistan’s top badminton player, pledged on Wednesday to raise her world ranking this year so that she can immediately qualify for the Olympics in 2024.

“My goal is to perform well in whatever tournament I play. In 2022, there will be good tournaments like Asian Games and Commonwealth Games, while next year is South Asian Games. I will improve my ranking by playing well in all three. I think I will succeed in achieving my goal,” said Mahoor Shahzad.

Mahoor was recently hurt while competing in the All Pakistan National Ranking Tournament final in Charsadda. She overcame Alja Tariq in the first game of the final match and was leading in the second game when she was hurt. She was unable to continue due to a hamstring injury, and Alja was proclaimed the victor of the last match.

“I could not lift the trophy despite getting close to victory, which made me very sad. I was depressed for three days, but I think that injury is part of the game,” Mahoor Shahzad added.

According to Mahoor, Pakistan’s badminton skill is on the rise.

“Alja played well in the tournament while there are good male players also. The atmosphere of competition is increasing, which is a good thing for Pakistan Badminton,” she concluded.