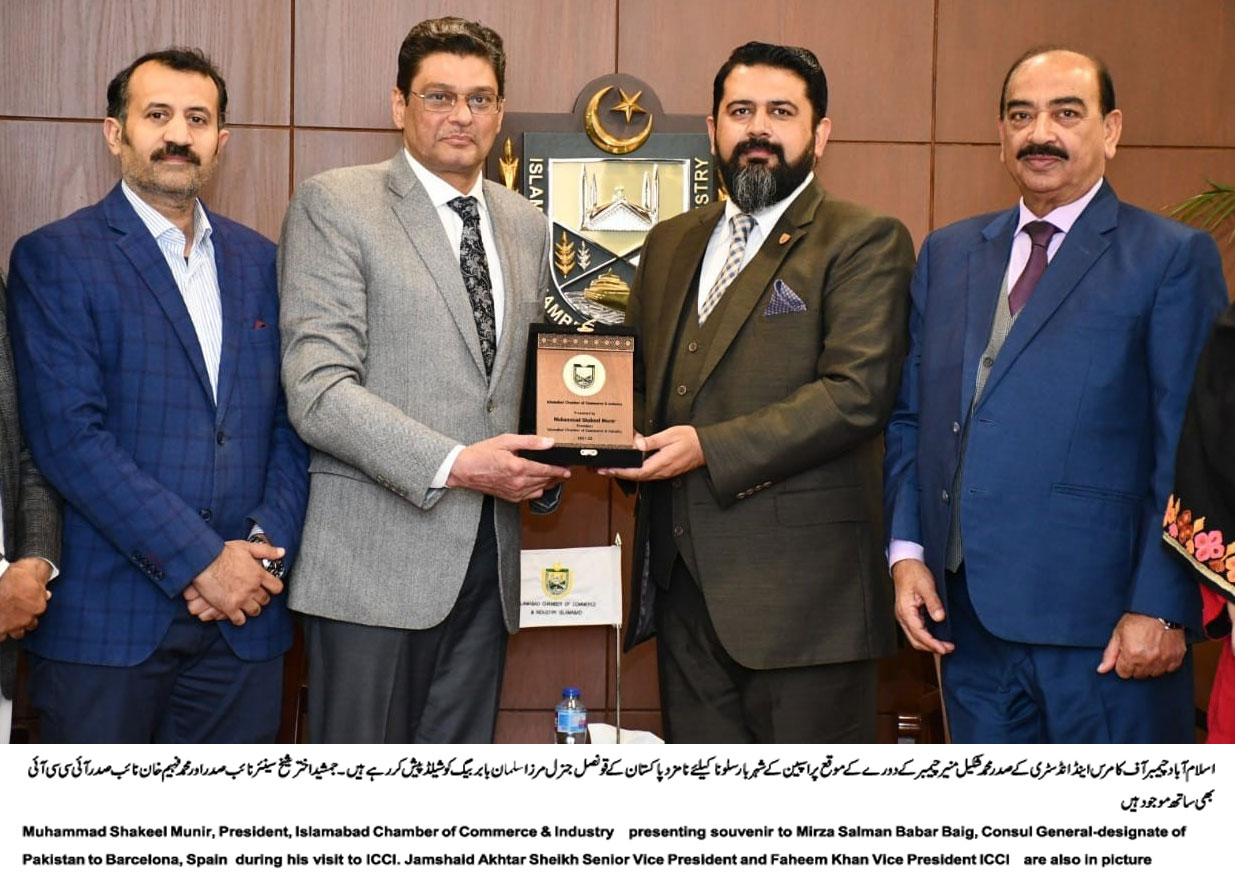 Islamabad: Mirza Salman Babar Baig, Consul General-designate of Pakistan to Barcelona, Spain visited Islamabad Chamber of Commerce & Industry and assured the business community that he would fully cooperate with them for promoting Pakistan’s trade with Spain as the two countries have good potential to take bilateral trade volume to higher levels. He said that the business community should identify the bottlenecks in the way of improving trade and exports with Spain so that he could work with the government to address them. He said that he would try to share the real time information with ICCI and trade bodies in Pakistan so that the private sector could capitalize on the potential opportunities of promoting exports with Spain. He said that Spain was an important member of the EU and offered good potential to Pakistan for further increasing exports to European countries under the GSP Plus regime. He asserted that he would try to remain in touch with trade bodies in Pakistan to keep them in loop about demand for Pakistani products in the Spanish market so that the Pakistani exporters could take advantage of them.

Speaking at the occasion, Muhammad Shakeel Munir, President, Islamabad Chamber of Commerce & Industry said that the bilateral trade between Pakistan and Spain was not up to the real potential of both countries and there was a need to promote strong business linkages between their private sectors to explore new avenues of enhancing trade relations. He said that the lack of awareness about Pakistani products in Spain was a major trade barrier, which should be addressed to get better penetration in the Spanish market. He said that Pakistan could export many products to Spain including marble & granite, fruits & vegetables, agro food, pharmaceuticals, sports goods, leather products, surgical instruments and IT goods. He stressed that the Pakistan Consulate General in Barcelona, Spain should conduct market research in the Spanish market about the demand of Pakistani products and share such reports with ICCI so that our members could capitalize on them.

Jamshaid Akhtar Sheikh Senior Vice President and Muhammad Faheem Khan Vice President ICCI said that Pakistan was an emerging market for business and investment and Spanish companies should be motivated to explore investment and JVs in various sectors of Pakistan’s economy including CPEC project. They said that Pakistani exports to the EU were dominated by textiles & clothing and urged that the government should cooperate with the private sector for diversification of exports to Spain for achieving better results.