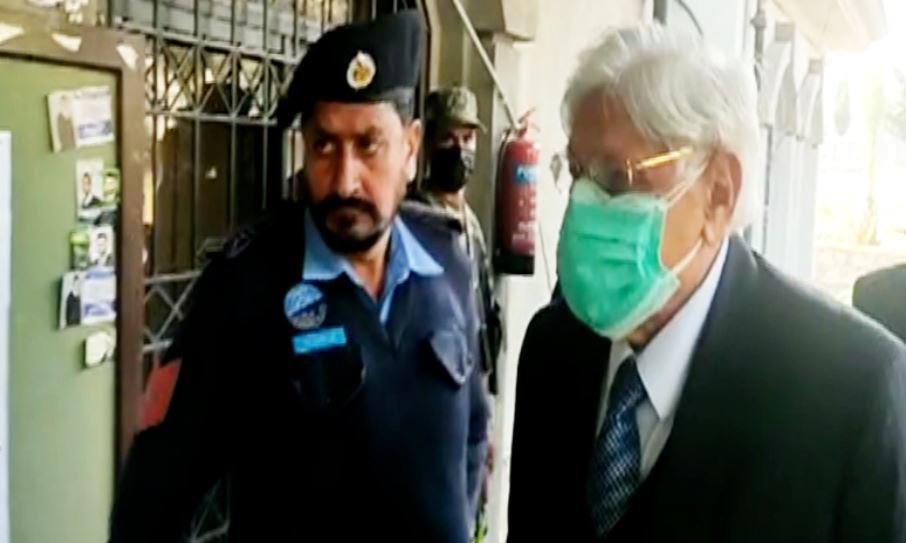 ISLAMABAD, NOV 30: Former chief justice of Gilgit-Baltistan Rana Shamim on Tuesday distanced himself from an affidavit attributed to him in which allegations of collusion were levelled against another former jurist Mian Saqib Nisar, telling the Islamabad High Court (IHC) that he had not yet examined the ‘leaked’ document.

Shamim made the remarks during the hearing on show-cause notices issued over an investigative report that highlighted Shamim’s alleged accusation against Nisar of colluding to deny bails to top PML-N leadership before general elections 2018.

The report published on Nov 15 in The News by journalist Ansar Abbasi, quoted Shamim as saying in an alleged affidavit that he witnessed Nisar relaying instructions to a high court judge to not release the father-daughter duo in the corruption references against them.IHC Chief Justice Athar Minallah had subsequently taken notice of the report and later issued show-cause notices to Abbasi, editor-in-chief of Jang Group Mir Shakeel-ur-Rehman, The News editor Aamir Ghouri as well as Shamim under the Contempt of Court Ordinance.

All four respondents were in the court but only Rehman, Ghouri and Abbasi had submitted their written responses.

At the outset of today’s hearing, Justice Minallah remarked that the case was related to “my court and its accountability”, adding, “along with media freedom, this case is also about the independence of the judiciary.”

Justice Minallah asked Shamim whether he had submitted his response, to which the latter replied that the court should ask his lawyer about it.

He added that there had been a tragedy in his family and requested the court to schedule the next hearing after December 12.

Shamim was previously represented by his son Ahmed Hassan Rana, an advocate of the Supreme Court. However, he later changed his legal counsel to Latif Afridi.

“I have not yet seen the [published] affidavit,” the ex-GB judge informed the court, referring to the document in the report carried by The News.

It may be mentioned here that The News report had said that Shamim confirmed the contents of the leaked affidavit both on a phone call with the correspondent, as well as a message.

When Justice Minallah asked what purpose Shamim’s affidavit would serve and whether he had given it to a newspaper, the former judge responded, “My affidavit is sealed in a locker in the UK. I don’t know how it was leaked.”

The IHC judge again pressed Shamim, asking him whether he had or hadn’t given his affidavit concerned to the newspaper. “You must have recorded the affidavit for some purpose,” the judge remarked, questioning why Shamim had written the affidavit three years after the alleged incident.

When Shamim requested the court to give him more time to submit his response on account of the chehlum of his brother and sister-in-law, the judge remarked, “This is also a serious matter. You should justify yourself.”

Matter of the ‘original’ affidavit

Attorney General of Pakistan (AGP) Khalid Jawed Khan, who was also present in today’s hearing, requested the court to direct Shamim to present the “original” affidavit in the IHC.

“Maybe his son leaked the affidavit,” he contended, referring to Ahmed.

Shamim responded that he had only one son who was usually present in Islamabad, reiterating that he had not seen the leaked affidavit himself.

At this, Justice Minallah directed Shamim to submit his signed affidavit in court.

When Shamim sought time to submit the affidavit, the AGP countered that the document was not 10 years old.

“This case is related to Article 19 and Article 19-A of the Constitution. The media’s role is secondary, responsibility lies on Rana Shamim.”

The former GB chief justice repeated his statement that he had not seen the affidavit, adding that he had been in a village and had read the report in a newspaper.

“Does he not remember [what happened on] November 10? If he has not written [the affidavit], who has?” the AGP questioned. “Every day is very important,” he added, referring to Shamim’s requests for more time.

Justice Minallah also directed the other three respondents — Jang group editor-in-chief, editor of The News and senior journalist Abbasi — to provide copies of their written responses to the amici curiae, observing that the court wanted the matter to proceed in a transparent manner.

The IHC chief justice remarked that he does “not believe in contempt of court”, adding that judges should be held in higher regard.

“Rana Shamim’s statement today has further complicated the case. Judges should not be used for political narratives,” he further observed.

When Shamim informed the court that it would be “very difficult” to get the original affidavit from the UK by December 7, Justice Minallah said the attorney general would help the ex-judge in this regard.

He directed Shamim to submit both his response as well as the affidavit by December 7 and adjourned the hearing till that date.

Rehman informed the court that he had to appear for a hearing in connection with a National Accountability Bureau (NAB) case against him on that date. The judge then directed him to submit an application for exemption from proceedings.

Following the hearing, Shamim was bombarded with questions by journalists at the IHC to which he only responded with “no comments please.”

During the last hearing on Nov 16, the IHC chief justice had directed the respondents to submit their replies to the show-cause notices within seven days. It had also directed them to appear in person at the next hearing to be held on Nov 26. However, the Nov 26 hearing was later cancelled.

The court had appointed the Pakis­tan Bar Council’s vice chairman, the Pakistan Federal Union of Journalists’ president, Advocate Faisal Siddiqui and Reema Omer as amici curiae in the matter.

“The attorney general for Pakistan or the advocate general for Islamabad Capital Territory, as the case may be, shall prosecute the alleged contemnors,” the court order said.

IHC Chief Justice Minallah, under the Contempt of Court Ordinance, had taken notice of the report, which claimed that in 2018 Nisar influenced judicial proceedings to prolong the detention of former prime minister Nawaz Sharif and his daughter Maryam Nawaz following their conviction in the Avenfield apartments reference. The allegations were made by Rana Shamim.

A day after the investigative report was published, Ahmed Hassan Rana, Shamim’s son, had revealed that the ex-GB judge has had long-standing relations with the PML-N supremo and his party in the capacity of an officer-bearer as well as lawyer.

His father has remained “in direct touch” with Nawaz and even met the PML-N supremo in England before the pandemic, Ahmed had shared.

Speaking on Geo News programme Aaj Shahzeb Khanzada Kay Saath, Ahmed had acknowledged that Justice Shamim had also served as the vice-president of PML-N Sindh in the past and was Nawaz’s lawyer in the Memogate scandal case.

During that show, Ahmed had also read out a text from Shamim in which the former judge stated that he had not released the affidavit in question to any journalist, and that it may have been “leaked” from the office of the notary public in London who attested the document.

Appearing on ARY News show Off the Record, Ahmed, who was Shamim’s lawyer at the time, had told anchor Kashif Abbasi that he had not seen the actual affidavit, and only saw pictures of it.

Regarding the timing of the affidavit, Ahmed had said he was not aware of the details and had yet to discuss this with his father as his lawyer.