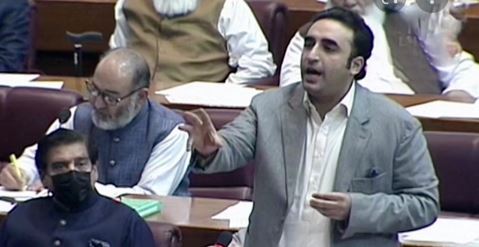 ISLAMABAD – PML-N President Shehbaz Sharif on Wednesday termed electronic voting machines (EVMs) “evil and vicious machines” and accused the government of not being sincere in creating a consensus on electoral reforms.

Addressing the joint session of parliament, Shehbaz said that the government and its allies wanted to bulldoze important bills. He termed it “illegal” and said that it was equivalent to spoiling the traditions of parliament.

Shehbaz, who had earlier today written a letter to National Assembly Speaker Asad Qaiser airing his grievances about the haste in passing the bills without a consensus, said that initially the joint session was delayed after the government said it would consult with the opposition on the issue.

“You sent a letter to me and the whole joint opposition,” he said, adding that in response he submitted a comprehensive answer with “great suggestions”. “But speaker, you cancelled your contact and we received no answer from you.”

Commenting on the proposal for consultations, he called it a “ploy to buy time” so that the government could secure the votes it needed. “You had no intention of doing consultations on the issue.”

He claimed that the “selected government” wanted to introduce EVMs because it can no longer ask the people for votes.

Shehbaz asked the speaker to defer the joint session so “comprehensive consultation” could take place on the matter of electoral reforms.

Addressing Qaiser, Shehbaz said that the people will not forgive him if he allowed the bills to be bulldozed in today’s session and urged him to recognise his responsibility as speaker of the House. He also decried the “illegal and unconstitutional” way the bills were presented.

He said the Election Commission of Pakistan (ECP), which is responsible for carrying out fair and transparent elections, had also expressed its reservations about EVMs. “They want to pass these laws despite their reservations.”

He said that the party that had once talked about democracy, transparency and change, now wanted to pass “black laws”.

“If you allow this black law to be passed, then Pakistan will be severely damaged for which responsibility will be on you and them,” he said while addressing Qaiser.

Shehbaz also stated that the several countries had rejected the “evil and vicious machines”.

“If the government used the energy that it is spending on this issue to tackle inflation, then we might have seen a difference. But they are not concerned. They are only concerned with remaining in power without securing the people’s vote.”