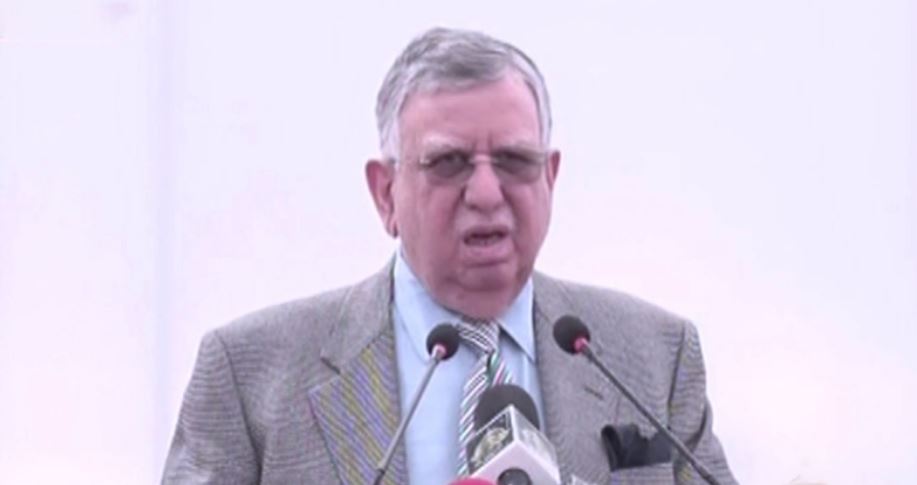 ISLAMABAD, NOV 14: Adviser to the Prime Minister on Finance and Revenue Shaukat Tarin on Sunday said that uncertainty surrounding the International Monetary Fund’s (IMF) loan facility for Pakistan will be over soon, saying a “good news” was on the cards.

Tarin had earlier this month announced that the government’s agreement with the IMF over the revival of the $6 billion Extended Fund Facility (EFF) had been reached and a formal accord would be signed in a week. However, an announcement in this regard is still awaited.

“Once the settlement with the IMF is reached, it will also rein in speculators causing devaluation of rupee,” the PM’s adviser said.

Tarin said speculative elements had caused eight to nine rupees’ worth of devaluation to the rupee, also adding that an additional demand for dollar by Afghan citizens was also adding to the pressure on the Pakistani currency.

The adviser thanked Saudi Arabia for giving Pakistan $3 billion in safe deposits and $1.2bn to $1.5bn worth of oil supplies on deferred payments, saying “it will be materialised in the next few days”.

the deadlock between the government and the IMF had broken after the two sides decided to show some flexibility in their respective stances on the issue of granting autonomy to the State Bank of Pakistan (SBP).

IMF was not happy with Islamabad backtracking on its commitment of granting aut­o­nomy to the SBP, prompting the Washington-based lending agency to halt the resumption of the loan facility. In March 2021, Pakis­tan had reached an agreement with the Fund on granting autonomy to the central bank, which was also approved by the IMF board.

Pakistan’s economic team, led by Tarin, has had several rounds of talks with Fund officials to apprise them of the numerical strength of the ruling Pakistan Tehreek-i-Insaf in the lower and upper houses of parliament where the Constitution will be required to be amended to grant autonomy to the SBP.

On March 9, the federal cabinet cleared a bill that was aimed at providing greater autonomy to the central bank over price control and fighting inflation. Autonomy was also linked with adopting exchange rates and monetary policy in an autonomous manner without the government’s interventions. Under the proposed law, no one will question the decisions of top officials of the SBP.

Soon after the decision, two leading opposition parties — the Pakistan Muslim League-Nawaz and the Pakistan Peoples Party — announced that they would block the passage of the bill in parliament.

‘No concession in oil prices’

Talking about soaring prices of petroleum products in the country, Tarin closed the door on any relief, saying the local prices were directly proportional to the rates in international market. “There is no concession in it. Whatever [hike] comes will be passed through [to the public],” he said.

He said the government had only passed 34pc of the international price hike to the public, while absorbing around 60pc of the burden itself.

He said the government was implementing an all-round strategy to fix the economy. “We are aiming for sustainable growth so that the poor segment may also get the benefits of it.”

The finance adviser predicted that the economy could grow by more than 5pc [in the current fiscal year], adding that revenue had seen a growth of 36pc, while agriculture has had bumper crops and large scale manufacturing’s growth was in double digits. “It shows that our economy is growing by more than 5pc.”

“We have 32pc growth in income tax, and our growth is all-round including covering sales tax, income tax and customs. We will try to up revenue target to 11pc from 9pc and then 14pc after it,” he said.

Meanwhile, Tarin attributed the hike in food prices to disruptions caused by the coronavirus pandemic.

“The prices of food jacked up internationally. We import some important food items and our common man is affected due to its soaring prices. The purchasing powers in other countries is good, but we have a problem in that area. We are trying to fix it,” he added.

In May 2019, Pakistan had reached an agreement with the IMF after months of difficult negotiations on a $6bn bailout package, called EFF. The 39-month bailout programme is subject to regular IMF reviews of Pakistan’s economic policy and growth. The arrangement calls for reducing domestic and external imbalances, removing impediments to growth, increasing transparency, and strengthening social spending.

In January 2020, the IMF put the programme on hold after the government did not agree to increase electricity prices and impose additional taxes. Recent media reports claimed that the IMF is demanding an increase of Rs4.95 per unit in electricity tariff and urging the government to impose taxes worth Rs150 billion.

The IMF also suggested concrete efforts for cost-recovery in the energy sector and state-owned enterprises. The Fund argued that this would help eliminate or reduce the quasi-fiscal deficit that drains scarce government resources.