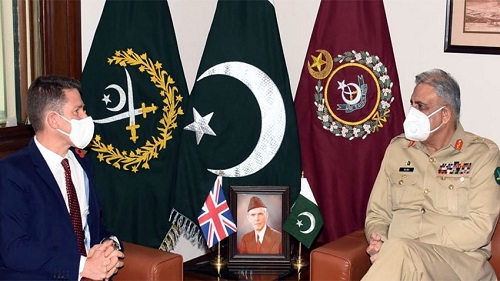 Islamabad : Chief of Army Staff General Qamar Javed Bajwa has reiterated the need for global convergence on Afghanistan for avoiding humanitarian crisis and coordinated efforts for economic uplift of the Afghan people.

This he stated during a meeting with the British High Commissioner Christian Turner who called on him Rawalpindi.

During the meeting, matters of mutual interest, regional security situation including the recent developments in Afghanistan were discussed.

The Army Chief said Pakistan values UK’s role in global and regional affairs and we look forward to enhance our bilateral relationship.

The British High Commissioner also appreciated Pakistan’s role in Afghan situation, efforts for regional stability and pledged to play their role for further improvement in diplomatic cooperation with Pakistan at all levels.