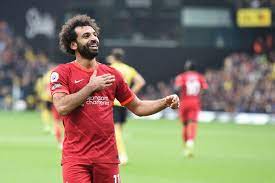 JOHANNESBURG , NOV 10  : Liverpool marksman Mo Salah leads Egypt against Angola this weekend with the clear objective of ending his scoring drought to help lift his nation into the final stage of Africa World Cup qualifying.

Qualifying for the 2022 tournament in Qatar intensifies on the continent with the last two group rounds, with victory in Luanda moving Egypt into the next stage as Group F winners.

The two-time African Footballer of the Year wants to get back on the goal trail in Angola having failed to find the net in his last three appearances for the Merseysiders.

Before his mini-slump, Salah had scored in 10 consecutive matches in all competitions for Liverpool.

Victory will take Salah and his team into the final qualifying phase to decide which five countries represent Africa in Qatar next year.

Here, AFP Sport highlights matchdays 5 and 6, which run from Thursday through Tuesday, with 21 nations chasing eight final-round places, 17 out of contention and Senegal and Morocco already through.

Riyad Mahrez-captained African champions Algeria and Burkina Faso are heading for a final round showdown on a Blida pitch publicly criticised by both teams as unsuitable for international football.

While Algeria can pick nine starters from the 2019 Africa Cup of Nations final against Senegal, Burkina Faso will lack leading scorer Abdou Traore and Aston Villa forward Bertrand Traore due to injuries.

Victory for Tunisia away to closest challengers Equatorial Guinea will clinch first place with a match to spare, and Wahbi Khazri is a potential match-winner for the Carthage Eagles.

He scored a 68-metre goal recently in the French Ligue 1 and has notched three in four World Cup qualifiers, including the last in a 3-0 home win over the Equatoguineans.

Nigeria recovered swiftly from a stunning home defeat by the Central African Republic and will take an unassailable lead if they defeat Liberia in matchday 5 and Cape Verde fail to secure maximum points.

Matchday 5 wins for leaders the Ivory Coast at home to Mozambique and Cameroon away to Malawi will leave one point separating them heading into a final round showdown in Yaounde.

Ivory Coast will miss unavailable Crystal Palace winger Wilfried Zaha while Cameroon have called up Ajax Amsterdam goalkeeper Andre Onana, who has completed a lengthy ban for a doping violation.

Mali appear the strongest of the African challengers who have never qualified for the World Cup and hold a two-point advantage over Uganda in a section where Kenya have fared dismally.

A Malian Eagles squad including Southampton winger Moussa Djenepo will seal top spot with a match to spare if they win in Rwanda and Uganda fail to secure maximum points when they host Kenya.

Home and away victories over Libya gave the record seven-time African champions a four-point advantage and even if they lose in Angola, a win over Gabon in Alexandria will ensure progress.

A groin injury could prevent Arsenal midfielder Thomas Partey playing for Ghana against Ethiopia, but he is a likely starter in a probable group decider at home to leaders South Africa.

South Africa forward Victor Letsoalo, who has impressed for newcomers Royal AM in the domestic league, misses the home match against Zimbabwe through suspension.

Only pride is at stake in a group where Senegal boast a perfect four-match record and clinched first place last month by winning away to Namibia through a Famara Diedhiou hat-trick.

Senegal have a powerful ‘spine’ of goalkeeper Edouard Mendy, centre-back Kalidou Koulibaly, midfielder Idrissa Gueye and forward Sadio Mane and are expected to qualify for Qatar.

Morocco have also secured a final-round place, helped by playing away matches against Guinea and Guinea-Bissau at home because of a Conakry coup and a Bissau stadium not up to international standards.

Bottom team Sudan are another country without a suitable venue for World Cup qualifying so they must tackle the Vahid Halilhodzic-coached Moroccans in Rabat.

The most intriguing section with co-leaders Benin and Tanzania, top seeds the Democratic Republic of Congo and surprise 2019 Cup of Nations quarter-finalists Madagascar all capable of finishing first.

Madagascar may be four points behind the pacesetters, but will snatch top spot if they defeat Benin and Tanzania and DR Congo draw their two fixtures.