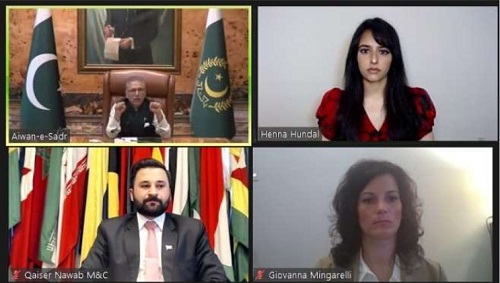 Islamabad, 08 Nov  2021: Dr. Arif Alvi, the President of Pakistan, recently discussed the importance of e-voting to Pakistan’s electoral process in an interview with Giovanna Mingarelli, an award-winning Canadian technology entrepreneur and founder of M&C Consulting.

In the interview, which was featured on the Henna Hundal Show, President Alvi discussed how he has advocated for e-voting in Pakistan since 2010. His case was heard in the Supreme Court in 2018, but was met with concerns over hacking.

“In the supreme court, somebody mentioned the fact that internet voting can be hacked. And I said yes it can be hacked, similar to the fact that people can take planes and the plane can crash. But what are the percent chances of hacking? And I took out my phone and told the Chief Justice of the Supreme Court and asked him, do you have any idea of the amount of transactions that take place digitally in the world today? And that was 2018. He said maybe a few billion dollars and I said no, five trillion dollars are moved on digital platforms throughout the world in a day,” he said.

However, he said digital voting requires a few steps including: the voter having access to a smartphone, a secure system where voters’ identities can be verified, and the ability for the vote to not be traceable but can be audited if needed.

He added that in the Philippines, for example, the use of electronic voting has increased voters’ confidence in the voting system.

“This is a public situation where we have to convince the people of Pakistan that this is a tried and tested situation,” President Alvi said.

In his interview with Ms. Mingarelli, President Alvi also addressed his interest in inclusive development strategies through digitization of society.

“I think there is unanimity in the world that digital digitization of an economy increases our GDP, any GDP, by one or two per cent,” he said, adding that women also play an important role. “Involvement of women in the productive cycle in the economy further increases our gross domestic product and gross national product.”