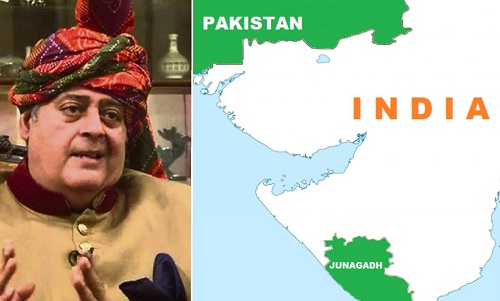 ISLAMABAD,08 Nov 21 :India through an act of brazen aggression transgressed upon the Muslim-ruled princely state of Junagadh and occupied it by force soon after the partition of the Indo-Pak sub-continent in 1947.

An analytical report released by Kashmir Media Service said that Junagarh that had the unique dispensation of being the second largest among Muslim states and a rich one as it was ranked 5th in terms of revenue generation among 561 British India princely states was illegally occupied by India in blatant violation of ‘Article 26’ of ‘Vienna Convention of law on treaties.

History is evident to the fact that Nawab Mohabat Khanji, the then governor of Junagadh reached an agreement with Quaid-i-Azam Muhammad Ali Jinnah, Governor General of Pakistan and signed the ‘Instrument of Accession. Junagadh became the first princely state to accede to Pakistan on September 15, 1947.

Junagarh, the report added, is an integral part of Pakistan lawfully as there is a genuine ‘Instrument of Accession’ duly signed by Nawab of Junagarh & Quaid-i- Azam Muhammad Ali Jinnah.

After the culmination of the agreement, when the Nawab of Junagadh visited Karachi, capital of Pakistan at that time, to discuss procedural details concerning accession, India behind his back, took it as a chance of interference and advanced its troops and occupied Junagadh on November 9, 1947.

The fact is India is illegally holding both Kashmir and Junagarh in violation of international laws and the partition plan.

Junagarh is an int’l issue as the matter had been raised at the UN in 1948 by the then Pakistan’s foreign minister.

Pakistan is committed towards the issue of Junagarh as it has included it in its new political map.

Kashmir and Junagarh both share the same fate as only the people of these states have the right to decide their political future, the report said.