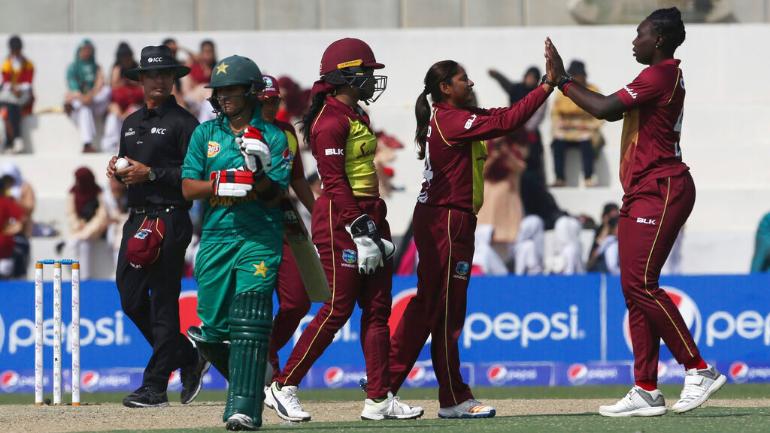 KARACHI , NOV 08 :  A brilliant century by player of the match Deandra Dottin scripted West Indies Women’s to 45-run win over Pakistan Women in the first One-Day International at National Stadium on Monday.

The West Indies opener smashed 132 off 146 balls and smoked 18 fours and two sixes after Pakistan’s stand-in captain Sidra Nawaz opted to bowl after winning the toss. This was Dottin’s best score in the format.

Dottin added 119 runs for the third wicket with Hayley Matthews, who scored 57 off 67 (eight fours), as their partnership set the platform for the tourists to post 253 for eight before Shemaine Campbelle scored a brisk 23 off 20.

Birthday girl Fatima Sana, who came into this match after recording a five-wicket haul in the fifth and final ODI against West Indies in Antigua in July, took two for 65. This match marked a significant moment in the 20-year-old’s career as she opened the bowling for Pakistan against the very opposition to whom she bowled as a net bowler when they were in the city two years ago for three T20Is.

Iram Javed fought back with a 34-ball 40 as she added 57 runs for the fourth wicket with Kainat Imtiaz (24 off 60), but the dismissal of the former pretty much settled the game in the tourists favour.

Aliya Riaz top-scored with 46 off 61 (three fours). She was run out in the 47th over with Pakistan 56 runs away from the target.

The two teams will play the second ODI on 11 November at the same venue.