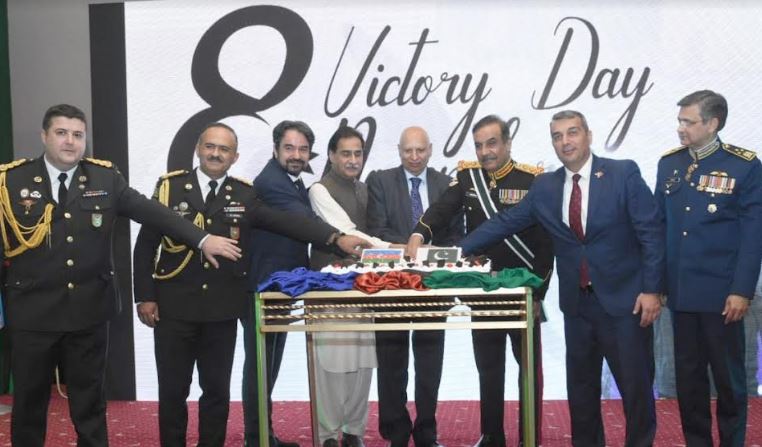 The chief guest General Nadeem Raza also performed the cake cutting ceremony along with other guests.

Ambassador of Azerbaijan Khazar Farhadov while welcoming the guests said it was an honor for him to speak at the first victory day being celebrated in Pakistan. Ambassador said due to the ethnic cleansing carried out by Armenia over a million Azerbaijani people were left homeless.

He said after the liberation of the areas Azerbaijan govt started rehabilitation work in the areas and I am pleased to inform you that in just 8 months Fuzuli airport was made operational, which was recently inaugurated by the President of Turkey and President of Azerbaijan. He said Azerbaijan remains committed to world peace and stability.

Ambassador Khazar also talked about the Kashmir issue and said his country fully supported resolution of the dispute as per the relevant UN resolutions.

Defence Attache Col. Mehman Novruzlu  in his speech highlighted the role of valiant Azerbaijani forces that foiled the evil designs of enemies and won victory for their country. He also thanked Pakistan for extending moral and diplomatic support during the entire conflict. He also paid glowing tributes to martyrs and heroes of the Patriotic War.

One minutes silence was observed for the martyrs of the war.