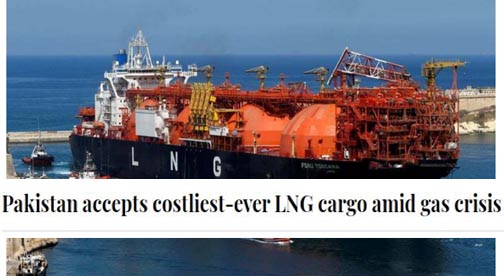 ISLAMABAD, NOV 7: Pakistan on Saturday accepted an LNG cargo at the highest-ever price of $30.6 per Million British Thermal Units (mmbtu) from Qatar Petroleum on the grounds of averting a possible gas crisis in the upcoming peak winter month.

The Pakistan LNG Limited (PLL) had floated emergency bids for two cargoes to be supplied in November, as the firms involved, Gunvor and ENI, had defaulted on their commitments.

The PLL has short- and long-term agreements with Gunvor and the ENI for one LNG cargo each every month, but both suppliers refused to honour their part of the agreements. As a result, the state-owned firm had to call a tender on emergency basis for two LNG cargoes for the months of December and January.

While the bids were called for cargoes to be supplied between Nov 19-20 and Nov 26-27, the PLL decided not to entertain the first bid for the middle of November.

Sources in the Petroleum Division said the first tender for supply on Nov 19-20 was scrapped as the country was facing gas shortage in December.

Therefore, the lowest bidder for the supply on Nov 26-27 was Qatar Petroleum at $30.65 per mmbtu, as re-gasification and supply of LNG into the system would be done in December, the sources added.

The PLL has been facing criticism for lacking proper strategies and ensuring LNG supplies when its prices were low in the international market. At the same time the state-owned entities had restricted the private sector from importing LNG as it could challenge the monopoly enjoyed by the public sector.

“The government has already floated the policy to allow the private sector to import LNG for their consumption and sale to various industries and sectors, but some government departments are creating hurdles in the implementation of this policy,” said All Pakistan CNG Association Chairman Ghiyas Paracha.

He said the Petroleum Division and the Oil and Gas Regulatory Authority (Ogra) had to take notice of this situation because the national economy and most importantly consumers were suffering due to expensive imports.

“We fear that the price of Compressed Natural Gas (CNG) will go up by Rs8-9 per kg in December because of the single cargo being brought at the cost of $30.65 per mmbtu,” Mr Paracha added.

Though the impact would be faced by industries, it is unlikely that the government may increase gas rates for domestic consumers.

The move to allow the private sector to import LNG independently had been on the cards since 2011. After passing through various stages, Ogra, in December 2018, approved the gas network code for use of pipelines of the Sui Southern Gas Company and Sui Northern Gas Pipelines Limited by any third party. However, the third party would have to obtain licences from the regulator and other relevant authorities and pay the pipeline use charges to the companies.

In November 2020, the Cabinet Committee on Energy (CCoE) had stressed on creating competitive market in the gas sector to end the monopoly enjoyed by both the state-owned gas utility companies – SNGPL and SSGC – and called on the private sector to perform an active role.

However, the idea could not materialise due to lack of planning and approvals by the state-run gas utility firms.

Meanwhile, the PLL has recently floated a tender to allocate idle capacity of LNG terminals on short notice for the supply of LNG equivalent to 385 million cubic feet daily (mmcfd) gas for December, 240 mmcfd for January 2022 and 275 mmcfd for February 2022.

The last date to file the application to obtain idle capacity at the existing terminals is Nov 18. At the same time, the PLL has said the available re-gasification capacities may vary both on a daily and a month-average basis based on the available berthing slots and requirement of the PLL’s own customers.

Replying to the query about the offer by the PLL to utilise idle capacity at LNG terminals, one of the private sector-licensed importers said the time to respond was too short.

On the other hand, analysts believe that the whole system needs revamping as it is not easy to determine the demand on a long-term basis to assess the idle capacity at LNG terminals.

“There is a continuous demand from the power sector and there are other long-term customers, therefore, determining the idle capacity for a period of four to six months in advance seems difficult for the PLL,” Head of Research and Development at Pak-Kuwait Investment Company Samiullah Tariq said.

Pakistan LNG Limited (PLL) is a public-sector company and is a wholly owned subsidiary of Government Holdings (Private) Limited (GHPL) which is 100pc owned by the Government of Pakistan (GOP).

The PLL imports LNG at the LNG terminal located in Port Qasim and supplies regasified LNG (RLNG) into the network of gas utility companies.