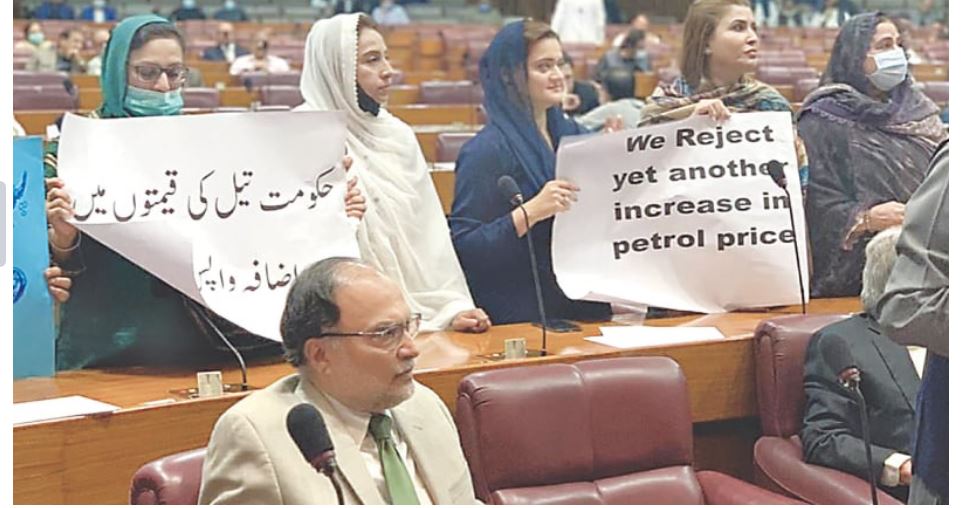 ISLAMABAD: Both houses of parliament on Friday witnessed the opposition’s outcry over the fresh wave of price hike, with its lawmakers chiding Prime Minister Imran Khan for his criticism of the past rulers for increase in prices of petroleum products and power tariff and devaluation of the rupee and calling them thieves for the same from atop a container before coming into power.

At the very outset of the Senate proceedings, Leader of the Opposition in the House Syed Yousuf Raza Gilani told the chair that many opposition lawmakers would like to speak on price hike. He also announced that a token walkout would be staged by the opposition as a mark of protest against the government’s anti-people policies.

Later, PPP’s Mustafa Nawaz Khokhar also lodged a protest when the house continued with the routine business, saying the agenda should be suspended to take up the issues facing the people. “Lives of the people have been ruined and we are behaving in a manner as if everything is normal,” he said, pointing out that sugar was being sold at Rs160 per kg.

PML-N WANTS DISCLOSURE OF DETAILS OF AGREEMENT SIGNED WITH TLP

The house echoed with the slogans of “sugar thieves” and “flour thieves”. The opposition senators took the prime minister to task for making the life of the common man miserable due to rising inflation. They gathered in front of the Senate chairman’s podium to chant anti-government slogans before staging a walkout from the house as a mark of protest against the unprecedented price hike.

Yousuf Raza Gilani, just after the question hour, asked Senate Chairman Sadiq Sanjrani to let the opposition lawmakers speak on the latest increase in prices of petroleum products and other essential commodities before taking up any other agenda.

He said the prime minister was ill-advised to speak on the issue of price hike and increase in petroleum products’ rates and the impending gas crisis, adding that instead the finance minister should have explained these things at a news conference, as after his address to the nation oil prices were revised upwards within 48 hours.

Senator Mushtaq Ahmed of the Jamaat-i-Islami said the country was under the grip of a price-hike tsunami, adding that petrol and diesel prices had been jacked up to Rs145 and Rs142 per litre, respectively, while the price of 50kg bag of sugar had been increased by Rs1,000. He said the price of ghee had doubled in three years to reach Rs400 per kg, while that of 10kg bag of wheat flour had been increased by Rs268 to Rs600.

The JI senator regretted that people had been left at the mercy of mafias controlling the process of essential commodities, including wheat and sugar. He said all the PTI’s financial managers had been imposed by the IMF. He said the biggest relief package for the masses would be resignation of the prime minister and reviving prices of key kitchen items and gas and petrol rates to the levels prevalent in 2018.

Mushtaq Ahmed said the government was least concerned about the plight of people and was rather desperately fulfilling demands of the IMF, as the economy had been practically outsourced to them. “The PM relief package is a joke with the people and like rubbing salt into their wounds,” he remarked.

Warning the government of a revolution, the JI lawmaker asked it to learn a lesson from the French revolution. He said the rulers should be mindful of the time when the hungry and jobless youth would be compelled to lay a siege of the power corridors. He also feared that as inflation was rising and poverty increasing, the crime rate would increase and society would be facing anarchy.

“Those enjoying protocols, helicopters and other privileges will face the wrath of people one day. This injustice can no longer be tolerated. The opposition must take stock of the situation to save the country,” he observed.

Leader of the House in the Senate Dr Shahzad Wasim, in his response to the opposition’s speeches, said the rates of petroleum products had been enhanced due to an increase in their prices in the international market. He said the government had significantly reduced taxes on petroleum products.

Dr Wasim said PM Imran Khan had presented a massive relief package of Rs120 billion to provide essential items on subsidised rates. He said that in addition to the relief package, several projects were also being run under the Ehsaas Programme at a cost of Rs260 billion for the deserving people.

Later, PPP parliamentary leader in the Senate Sherry Rehman pointed out quorum, followed by a protest by the opposition in front of chair’s dais, before walking out of the house.

The Senate will meet again on Monday at 4:30pm.

The National Assembly’s session was a bit noisier where the slogans of “shame, shame” continued during speeches against price hike. Some members were also seen holding placards inscribed with slogans demanding reversal of hike in petroleum prices.

Speaking in the house, PML-N lawmaker Khawaja Asif not only came down hard on the government for the unprecedented price hike, seeking a full-fledged debate on the issue, but also demanded disclosure of details of a secret agreement the government had reached with the outlawed Tehreek-i-Labbaik Pakistan (TLP).

He regretted that the house was being made irrelevant and asked as to why the agreement was being kept as a guarded secret. He also sought to know how many had lost their lives during the TLP protest and how much was the financial impact.

Referring to the wheat and sugar scams, Mr Asif regretted that no action had been taken, adding that accountability was lopsided and meant to victimise only the opposition.