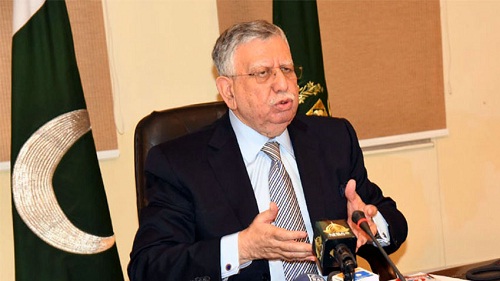 Islamabad : Advisor to the Prime Minister for Finance Shaukat Tarin says Pakistan alone is not facing the inflation, but is a global phenomenon nowadays.

Talking to a private news channel, he said the government is making all out efforts to reduce inflation as Prime Minister Imran Khan has announced a huge relief economic package for those who are earning less than 30,000 rupees per month.

He said the country has entered in the growth zone now and five per cent growth rate would benefit the middle class of the country.

He said prices of petroleum products are still less in the country as compared to India and Bangladesh.

The Advisor said the government has reduced petroleum Levi and is continuously decreasing the taxes during the last six months.

Meanwhile, Minister of State for Information and Broadcasting Farrukh Habib says due to prudent and pro-people policies of the present government, minimum impact of world inflation is passed on to the consumers.

In a statement, he said the recent report by Food and Agriculture Organization of the United Nations has made the fact clear that current inflation is record high in the world.

He said to ensure stability in prices of edible items including vegetables, the Federal and provincial governments are taking steps on daily basis.