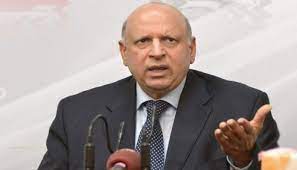 LAHORE, Nov 02 : Punjab Governor Chaudhry Mohammad Sarwar on Tuesday termed the series of seventeen attacks  on mosques in the Indian state of Tripura as a gross violation of religious freedom and said that India had become a dangerous country in the world for minorities.

condemnable. Pakistan will continue to raise its voice against the oppression of Indian Muslims, he added.

The Punjab Governor shared a video of the attacks on mosques in a tweet, and said that there had been

a surge in attacks by the RSS terrorists on mosques and Muslims in India. He said the terrorism against

Indian Muslims was state-sponsored, adding that Muslims were no longer safe in India. The oppression

on Indian Muslims was utterly condemnable, he said.

Chaudhry Mohammad Sarwar said that Muslims as well as other minorities were not safe in India.

He said that minorities were being killed with impunity, their places of worship were attacked and they

do not have the freedom to practice their religion.

While calling upon the United Nations and other international organizations, he said that it was high time

the organizations must take notice of human rights violations in India and act immediately to stop them,

adding that through diplomatic pressure, the international community must ensure the protection of minorities in India.

All minorities including Hindus and Christians were free to practice their religion, he said. He also assured

including the United Nations to protect their rights and they would not be left alone.

was with Pakistan Army in the war against terrorism. Terrorism would be rooted out from Pakistan by

all means, he added.