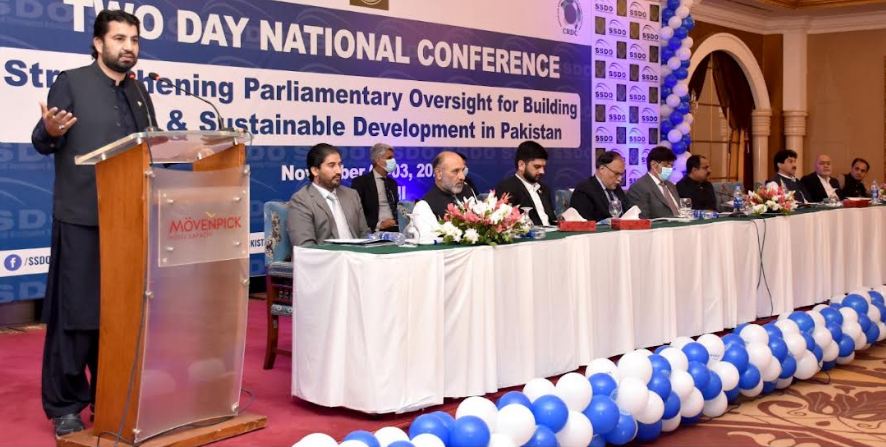 KARACHI , NOV 02 : Highlighting the significance of the justice, Deputy Speaker of National Assembly, Qasim Khan Suri said that a better society cannot be built without peace and justice, and when there is justice, there will be peace in the society.

We have to unite to make society better; he said adding that it is our responsibility to provide the facilities to the areas from where we have been elected On Sustainable Development Goals (SDGs), Deputy Speaker told that the role of the provinces was important for this purpose and however, federal government was doing its best to fulfill the SDGs task.

Talking on the issue of environment, he asserted that the Prime Minister launched a project to plant ten billion trees and the world was appreciating it. The uniform curriculum has been introduced by the government to ensure quality education in the country and a curriculum will be taught in public and private schools, he informed. Moreover, the health card is being given to the people and in addition, the subsidy is being provided to support the vulnerable class of the society, he claimed. Speaking on the occasion, Chief Minister Sindh, Syed Murad Ali Shah said that despite having majority in the house, the coalition government was formed in the Sindh province as we could work together to bring the peace here. Until 2013-14, Karachi was considered one of the most dangerous cities in the world but we all worked together with the institutions to bring the peace, Chief Minister claimed, adding that after the peace, the development work has been started. Besides, we have passed many laws especially to support vulnerable groups including minorities in the province. On the occasion, Former Federal Minister and MNA Ahsan Iqbal mentioned that as we entered the new century, the entire world leadership had given the Millennium Development Goals program and various countries worked but some missed its targets. In 2014, we woke up and started thinking about sustainable goals, he claimed, recounting that long-term goal could be achieved by strengthening institutions and involving the private sector. Providing basic necessities to our people should be a national agenda, he told. If no one talks, how they will understand each other, he asked, suggesting that our parliamentarians have to keep political and mutual differences aside. Legislation is the first job of parliamentarians.