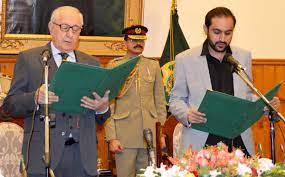 QUETTA , OCT29 :  Mir Abdul Qudoos Bizenjo took oath as chief minister (CM) of Balochistan on Friday at the Governor House as he has been virtually elected unopposed since no other candidate filed nomination papers for the top slot on Thursday.