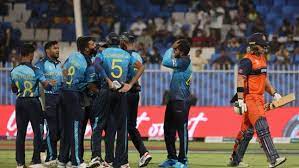 SHARJAH , OCT 22 :  Bowlers Wanindu Hasaranga and Lahiru Kumara set up a crushing eight-wicket win for Sri Lanka in the final round-one match of the Twenty20 World Cup after they skittled out Netherlands for 44 on Friday.

Sri Lanka moved into the Super 12 stage with three wins and top of their group ahead of Namibia who shocked Ireland in the first match of the day in Sharjah.

Electing to bowl first, the Lankans revelled on a sluggish track as it steam-rolled through the Dutch top-order that lost six wickets in the Powerplay.

Leg spinner Wanindu Hasranga and seamer Lahiru Kumara picked three wickets apiece as Netherlands stooped to 44 all out in 10 overs.

Earlier, Sri Lanka skipper Dasun Shanaka won the toss and elected to field against Netherlands in their bid to top the group in round one of the Twenty20 World Cup.

The island nation, who have already qualified for the Super 12 stage with two successive wins, have made one change with Charith Asalanka replacing Dinesh Chandimal.

“We are going to bowl first, because in the next stage we have three matches here and we want to assess the conditions well,” Shanaka said at the toss. “I watched the IPL (Indian Premier League) and batting second gives people a better chance.”

Sri Lanka are almost certain to finish top of the table ahead of Namibia, who shocked Ireland in the first match of the day to book their Super 12 spot, barring a heavy defeat in this match.

The Netherlands, who lost out of the Super 12s race after they went down to Namibia for their second loss, play for pride in their final match of the tournament. “We are going to leave this tournament on a positive note and we have a South African series, so hopefully we take momentum into that,” captain Pieter Seelaar said.

It will be 41-year-old Ryan ten Doeschate s final game for Netherlands and Seelar wished the veteran allrounder a great second innings. “Even when he came back later on, his input was very valuable,” said Seelar. “He s done fantastically well and I wish him all the best. Great guy.”