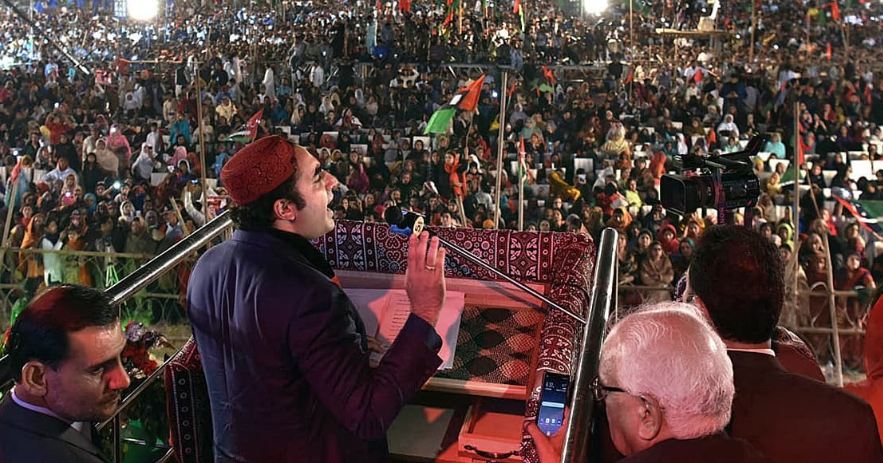 KARACHI: Primarily eyeing to strengthen its foothold in Karachi and mobilise its workers in the metropolis for upcoming electoral challenges, the Pakistan Peoples Party (PPP) on Saturday received a great political opportunity to further electrify its rally on Sunday in Bagh-i-Jinnah as the federal government raised petrol prices lifting the hopes of the key opposition party leaders about the success of their power show on Sunday (today) and eventual fall of the Imran Khan-led government in the centre.

The PPP is set to stage its power show in the city where being a ruling party it finds it easy to hold a rally with full support from the local administration and police.

Party leaders and workers were seen roaming around the venue of the rally putting finishing touches to the preparations and supervising the security and seating arrangements.

Sindh PPP president Nisar Khuhro along with senior party workers visited the venue after the sunset and was briefed about the arrangements.

Background interviews with couple of PPP leaders suggested that at least two meetings were chaired by PPP chairman Bilawal Bhutto-Zardari within a week where he stressed the need for a strong participation in the public meeting from the Karachi division.

Even in one meeting Sindh Chief Minister Syed Murad Ali Shah and the PPP chairman sent a “loud and clear” message to every participant to make the show successful mainly with participation from Karachi.

“Unlike past October 18 rallies, staged for the past 14 years to mark the anniversary of 2007 Karsaz bombing on Benazir Bhutto’s homecoming convoy, this time he [Mr Bhutto-Zardari] wants Karachi division to contribute more,” said a PPP leader.

“All previous rallies had always been successful, but it involves participation from all over Sindh and even different cities of the country. The PPP chairman believes that Karachi has much more potential and that party’s following should reflect in the rally,” the leader added.

The success in the recent cantonment board elections and winning of PPP candidates in the by-polls had lifted the spirits of the PPP leadership, which found it high time to fill the Karachi’s political ‘vacuum’ that further widened when once the most popular party of the city, Muttahida Qaumi Movement, came under the radar of the security establishment following the March 2015 raid on its headquarters Nine Zero and then Aug 2016 speech of its founder Altaf Hussain, he added.

At Bagh-i-Jinnah, amid security of police and assistance of the local administration, a large number of excited youngsters and workers of the ruling party were making arrangements for the rally pitched against the PTI government.

A pile of huge-sized speakers to support the sound system was being loaded over several trucks so they could be fixed at different places in the ground.

Behind the stage, a handful of youngsters were busy fixing a bunch of wires to connect them with the panel of sound and music system being set up along the stage.

On the stage electrifying scenes emerged when the lighting arrangements were finally approved by the local leaders. “The stage is ready and so is the PPP,” a local leader told Dawn.

“We are arranging chairs,” said Sindh Information Minister Saeed Ghani, who is also the city president of the PPP.