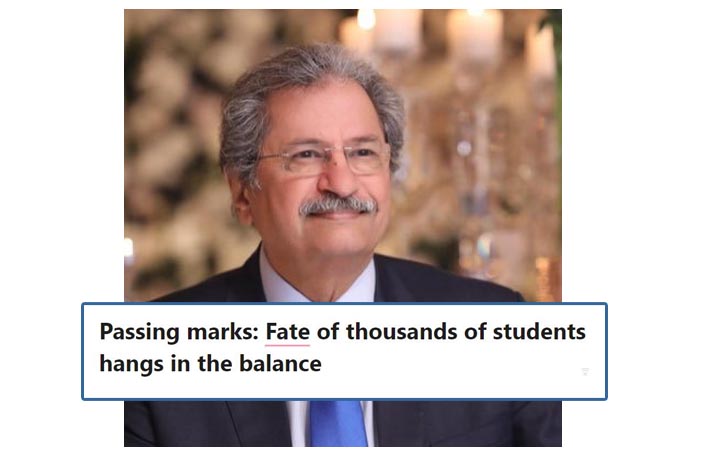 Students have demanded of the Education Minister Shafqat Mahmood, the Chairman of the Higher Education Commission and even the Prime Minister to look into the matter and provide immediate relief to all such students

ISLAMABAD: Due to an indiscreet decision of the Ministry of Education and the High Education Commissioner the fate of thousands of students hangs in the balance as those who got 3rd divisions are not able to even apply for the admissions to the next class.

According to the details the government had passed all students in the HSCC examination giving them just passing marks. When those students approached various universities for admissions, they were denied admissions because according to HEC rules only those who have 45 per cent marks can apply for admission to the next class.

Even the Allama Iqbal Open University, which used to entertain all students regardless of their percentage, has also refused admissions saying the HEC has barred it and put a condition of 45 per cent.

The affected students and parents are of the view that if the students could not get admission then why were they passed? And if they were passed they should have been passed with at least 45 per cent marks or a directive should have been issued to all colleges and universities that students with 3rd division may be given admissions only for this year.

Now thousands of students have been left in the lurch and they do not know what to do. They have demanded of the Education Minister Shafqat Mahmood, the Chairman of the Higher Education Commission and even the Prime Minister to look into the matter and provide immediate relief to all such students.

Sources at the AIOU revealed that the decision badly affected their financial positions as well because after this condition of 45 per cent the University cannot enroll hundreds of students, which means it has to incur loss of millions of rupees. Insiders say the Open University means it is open for all kinds of students regardless of their percentage therefore the new condition by the HEC has on one hand deprived hundreds of students of getting admissions and on another caused huge financial loss to the institution.