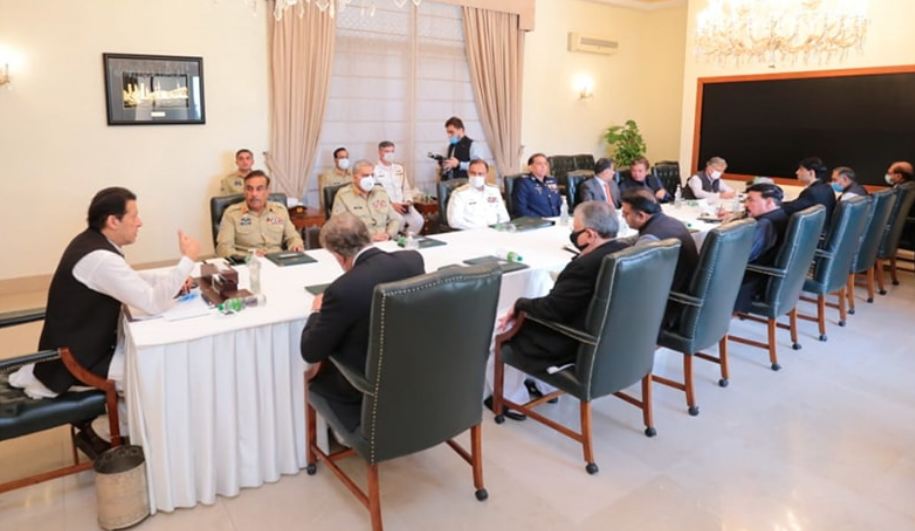 ISLAMABAD, OCT 8: A meeting of the National Security Committee (NSC) discussed matters of national security, the situation in Afghanistan and other important issues on Friday.

The meeting held at PM House was chaired by Prime Minister Imran Khan and attended by senior cabinet members, the national security adviser and the services and intelligence chiefs. It was convened to discuss the ongoing situation in Afghanistan, a statement issued by the Prime Minister’s Office (PMO) said.

The NSC is the highest forum for coordination on security issues.

During the meeting, Prime Minister Imran was given a detailed briefing on the evolving regional security situation, “particularly the recent developments in Afghanistan and their possible impact on Pakistan”, according to the PMO statement.

The NSC reiterated Pakistan’s commitment to a peaceful, stable and sovereign Afghanistan. “The participants noted, with concern, the dire humanitarian situation in Afghanistan and emphasised the urgent need for the international community to provide assistance to avert a humanitarian crisis,” the press release said.

The importance of international coordination on “constructive political and economic engagement” with the interim government in Afghanistan was also highlighted during the meeting.

Committee members stressed that the evolving situation in the region was “extremely complex”, and that any instability in Afghanistan could have severe implications for Pakistan.

“Agreeing with this view, the prime minister stressed the need for a coordinated policy effort,” the PMO said. It added that the premier issued directions for the establishment of a dedicated cell to synergise various streams of efforts on Afghanistan across the government, including international coordination for humanitarian assistance and effective border management to prevent “any negative spillover” into Pakistan.

Speaking to reporters after the meeting, Interior Minister Sheikh Rashid said the meeting lasting nearly two hours and was attended by the entire political and military leadership, including the army, air, navy and Inter-Services Intelligence (ISI) chiefs.

“All national issues were discussed in detail. The Afghanistan issue was also discussed. But none of those things can be talked about publicly,” he said.

Prior to the release of the photograph and video footage of the meeting, when Rashid was asked whether the meeting was attended by Lt Gen Faiz Hameed as the ISI chief or if the recently named Lt Gen Nadeem Ahmed Anjum was in attendance, the minister said: “[The change of command] will take 8-10 days.” It was further confirmed that the outgoing DG ISI attended today’s meeting.

Earlier, a government source had told that the meeting would discuss the developments in Afghanistan, border management, Pakistan’s efforts to support the new Taliban regime and implications of the situation for the country.

Prime Minister Imran and Foreign Minister Shah Mahmood Qureshi have strongly lobbied for recognition of the Taliban regime by the international community and resumption of foreign assistance for Afghanistan. However, their efforts have made little progress.

A source hinted that the meeting might also review Pakistan’s relations with the United States. It was believed that the status of talks with the banned Tehreek-i-Taliban Pakistan (TTP) would also be discussed at the meeting.