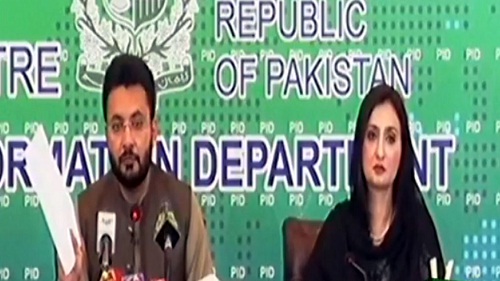 Islamabad : Minister of State for Information and Broadcasting Farrukh Habib says the NAB Ordinance is aimed at strengthening and making the National Accountability Bureau more vibrant.

Talking to the media along with Parliamentary Secretary for Law and Justice Maleeka Ali Bukhari in Islamabad on Thursday, he said Prime Minister Imran Khan is committed to curb the menace of corruption from the country. He said accountability is an essential element for democracy.

The Minister of State lamented opposition for irrationally criticizing NAB Ordinance. He said opposition has only one motive which is to protect their own vested interests and to get pardon in their corruption cases.

Speaking on the occasion, Maleeka Ali Bukhari said opposition is criticizing the ordinance without even reading its draft. She said government has devised a comprehensive ordinance to promote accountability in the country.

She said if opposition is ready to make some rational recommendations then government is ready to incorporate their suggestions.