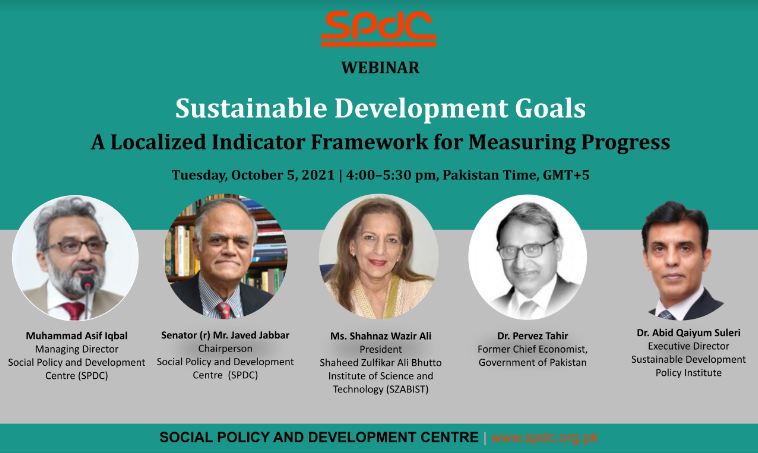 ISLAMABAD, OCT 5 (DNA) – Pakistan’s progress on Sustainable Goals (SDGs) has not been impressive so far. Federal and provincial governments will have to share the responsibility of taking the development agenda forward for enhancing the wellbeing of people.

These views were expressed by the experts in a webinar hosted by the Social Policy and Development Centre (SPDC) to share the findings of its recent research study entitled ‘Social Dimensions of the Sustainable Development Goals; A Localized Indicator Framework for Measuring Progress.’

The main focus of the study is to evaluate the social dimensions of SDGs in terms of data gaps and propose a set of preliminary national indicators for tracking the status of selected SDGs, including no poverty, good health and well-being, quality education, gender equality and reduced inequalities. It also discusses some key policy issues that are considered crucial for achieving sustainable social development including population growth, financing for SDGs, and the role of local governments.

Speaking to the webinar, Mr. Muhammad Asif Iqbal, Managing Director SPDC,stated that in Pakistan,lack of data for global indicators related to social dimensions indicates an overwhelming challenge for monitoring the progress. Data is available for only 33 out of 81 indicators for social SDGs, which makes the monitoring task difficult and incomplete.

The analysis based on the proposed framework of selected SDGs indicates that the overall progress of the country is only 48.8 percent. Moreover, considerable inter-provincial differences are observed. The highest value of the index is estimated for Punjab (51 percent) followed by Khyber Pakhtunkhwa (45 percent), Sindh (43 percent) and Balochistan (33 percent). Given this situation, achieving these goals appears to be a daunting task at this point.

While appreciating the analysis carried out by SPDC, Dr Pervez Tahir, Former Chief Economist at Government of Pakistan, endorse the idea of statistical selectivety of the SDGs for the analysis. He also expressed his disappointment with the role of Federal and Provincial Governments when it comes to their role in the implementation of SDGs. Headded that multidimensional poverty cannot decline until health and education indicators improve. Pakistan scored poorly in these sectors under the MDGs and a similar worrying trend is observed in case of SDGs.

During the webinar, Dr Abid QaiyumSuleri, Executive Director Sustainable Development Policy Institute, emphasized that SDGs are still seen as a donor driven agenda. There is a need to create local ownership of the sustainable development agenda. Devolution of financial and administrative power to local governments is essential for achieving SDGs. Provincial governments should revive provincial finance commission awards and financial resources should be distributed to the districts as per the PFC formula. In this way, marginalized districts and regions will get enough resources to develop.

While closing the webinar, MrJaved Jabbar, Chairperson SPDC, said that there is an unwillingness to recognize that political economy requires a holistic and participative approach at different levels of government and society. Pakistan’s incapacity to meet internationally recognized indicators such as SDGs stems in part from data gaps. He expressed concern over the lack of data on social indicators and said data paucity in this age of data abundance is a paradox. He also commended SPDC for providing a practical approach to monitoring SDG implementation in its new research.